People who have committed a crime once are increasingly likely to reoffend. This is particularly the case in Ghana. When 70 per cent of inmates are aged between 18 to 35 years, the country has a serious problem — the youth are their future leaders, but how will spending time behind bars affect them?

It may be odd to consider that once a person has committed a crime and done their time, they are likely to reoffend, therefore returning to prison. Why would someone want to go back to prison? In many countries, this is exactly what is happening. Ghana, in particular, is in a situation where their rate of crime is on the rise and, worryingly, the recidivism rates are increasing — specifically within the youth. Frank Baffour, an international James Cook University PhD student, is on a mission to find out why.

What is recidivism and how serious is it?

In Ghana, offender recidivism describes a person who has re-offended and been convicted more than once after she or he has gone through rehabilitation, reformation, and reintegration programs (Ghana Prisons Service, 2013). The rate of crime in Ghana and statistics on recidivism are alarming.

Additionally, as identified in a paper Frank has published with Journal of Offender Rehabilitation (Talor and Francis), overcrowding in prisons is a significant issue (Dako-Gyeke & Baffour, 2016). A prison in Ghana, built to accommodate 700 people, now houses approximately 4000 inmates — almost six times the number of people intended. All of the prisons in Ghana combined should house no more than 8000 people and currently they accommodate more than 14,000 inmates (Amnesty International, 2012).

Ghana is his home and he believes that the situation requires action.

“The youth are our future leaders,” says Frank. “There is a need to address this issue if many of Ghana’s youth are imprisoned. The future of the country is impacted; we are using state resources to cater for them while they are in prison, and there may be a sense of insecurity within the community when an individual is released.”

Find out more about Frank and the research team supervising his research project.

So, how do you combat such a problematic and multi-faceted issue?

A limited number of studies have been conducted on this issue, resulting in a lack of research to inform policy. Frank has identified the findings of three previous studies that he will be using as a starting point. These studies focused on the issues driving recidivism at the Kumasi Central Prison, the complications when reforming inmates at Tamale Central Prison, and community perceptions of discrimination against recidivists.

“These studies found a number of problems; there are inadequate counselling and rehabilitation services due to overcrowding and poor resources, and community reintegration challenges are contributing to inmates’ recidivism,” says Frank.

Frank’s research project will be using two theories to assess these issues and thoroughly understand the contributing factors to recidivism in Ghana. He’ll be focusing on three major prisons in Ghana. His project will be the first of its kind in Ghana, and the objectives are to suggest realistic interventions based on data and research.

“I will be using social learning theory — differential association, definition, differential reinforcement and modelling — within the prisons to determine if these problems exist because of overcrowding,” says Frank. “And secondly, labelling perspective to understand if the society’s reaction towards formally incarcerated inmates contribute to recidivism.

“Currently we intermingle offenders and inmates with all kinds of criminal history and due to limited resources, the inmates don’t get much contact with prison officers. Instead of spending time with the prison staff, they interact with each other and are more likely to learn the traits from more hardened criminals. This is social learning theory.”

Most often, convicted offenders enter prison along with their criminal behaviours, requiring rehabilitation to ensure their reformation before they are discharged. With the current situation, where most inmates in Ghana prisons hardly go through rehabilitation due to overcrowding, any effort to address recidivism may not be successful.

“In overcrowded prisons, they are in danger of becoming part of the criminal sub-group — a group of people who favour committing crime and non-conformity over conformity,” Frank says. “Once they are an inmate in a prison, where the officer to inmate ratio is imbalanced, they spend more time with other inmates and are likely to learn among themselves. My research aims to prove this is what is happening in Ghana prisons.”

Inmates’ perceptions of their treatment within the community following prison time is another major issue identified from the existing research. Frank will be determining how the formally incarcerated inmates felt when they went back into the community.

“Were they stigmatised?” he says. “Were they singled out as criminals? If so, did this influence their engagement with the community and reinforce their association with criminal sub-groups, effectively labelling them as a criminal themselves even though they had served their time?”

You are correct in thinking that this is a big task…

“Participation in the interviews is voluntary, I will only recruit inmates who want to be a part of this process,” he says. “We will be advertising within the prisons, making announcements for people to come and participate. We’ll leave a ballot box in each of the prisons for interested inmates to put themselves forward.”

“I want to do many seminars in Ghana after I complete my research to raise awareness,” he says. “If I do this research in Australia, and don’t communicate the findings to the people of Ghana, there would be no point in doing it. On a personal level when I return to Ghana, if I have the resources, I’d like to go to the prisons, talk to the inmates to find out the challenges within the prison environment, and how those challenges can be addressed from the inmates own point of view.”

For now, we stay tuned while Frank conducts his research to prove these theories.

Find out more if you are interested in studying a Bachelor of Social Work, a Masters of Social Work (Professional Qualifying), or you too would like to complete your PhD with JCU and study a Doctor of Philosophy (Society and Culture). 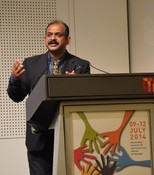 A/Prof Abraham Francis
Abraham Francis is an Associate Professor in Social Work and Human Services at James Cook University in Australia.  He worked with many NGO’s and Corporate Sector as a social worker. Dr Francis has initiated and established many international
Read profile