Future medic focused on bettering health for all For most year ten students from metropolitan Melbourne, an exchange program to Arnhem Land would be an eye-opener at the very least. For JCU Medical student, Isabelle Nehme it proved the driver that would see her pursue a career in medicine with a focus on health systems and improving care and equity for those in need.

“I was one of a small group of girls selected for the exchange. We stayed with an Indigenous community for a month, which whilst incredibly eye-opening, was also quite raw and confronting,” Isabelle said.

“I felt so helpless that it drove me to want to do something about it. I couldn’t ignore the systemic factors which shaped daily life for the locals there. I felt that given my interest in health this was something I could work to address.”

Coming from a non-medical family background, Isabelle said her initial interest in the health field had stemmed from being on the receiving end of care.

“From a very young age, members of my family and I had chronic conditions. While I believe medicine in Australia has great acute care, I think sometimes we are still finding our feet when it comes to treating patients with chronic conditions and all the factors and barriers that come with that.”

“I realised I was passionate about systems, access to care, and how each stakeholder interacts with the healthcare system. I found myself increasingly aware of what good doctors looked like, and what types of interactions and care felt truly patient-centered. That has motivated me with my study.” Fast forward half a dozen years and Isabelle is well on her way to achieving her goals. With a passion for rural and remote health, she enrolled in Medicine at James Cook University where she has just completed the fourth year of the program and her first of a Master’s degree in Public Health majoring in Health Economics.

Her passion for health systems has also seen her represent Australia at the United Nation’s Universal Health Coverage Multi-stakeholder hearing in New York.

“I had been a lead author for a policy paper on universal health coverage in which we’d set out calls to action that we wanted other stakeholders to work on. But after the policy passed, I felt like I was no longer moving the needle on its calls to action. I wanted to interact directly with the issue’s key decision-makers and be at the forefront of discussion.”

With its aim of developing universal health coverage, the United Nations hearing gave Isabelle the perfect opportunity to do just that.

“It was eye-opening. Amongst a room filled with global leaders, we were one of just two groups representing the voices young people.  I walked in thinking I was a nobody. I wasn’t a 65-year-old CEO with weight to my name. I walked out of the experience realising I didn’t have to be a big shot to make a difference. I just needed to know how to push action and practicality. Age wouldn’t prevent me from holding others to account; from being able to bring many groups of people with different interests but a unifying mission together and move them forward to action.” 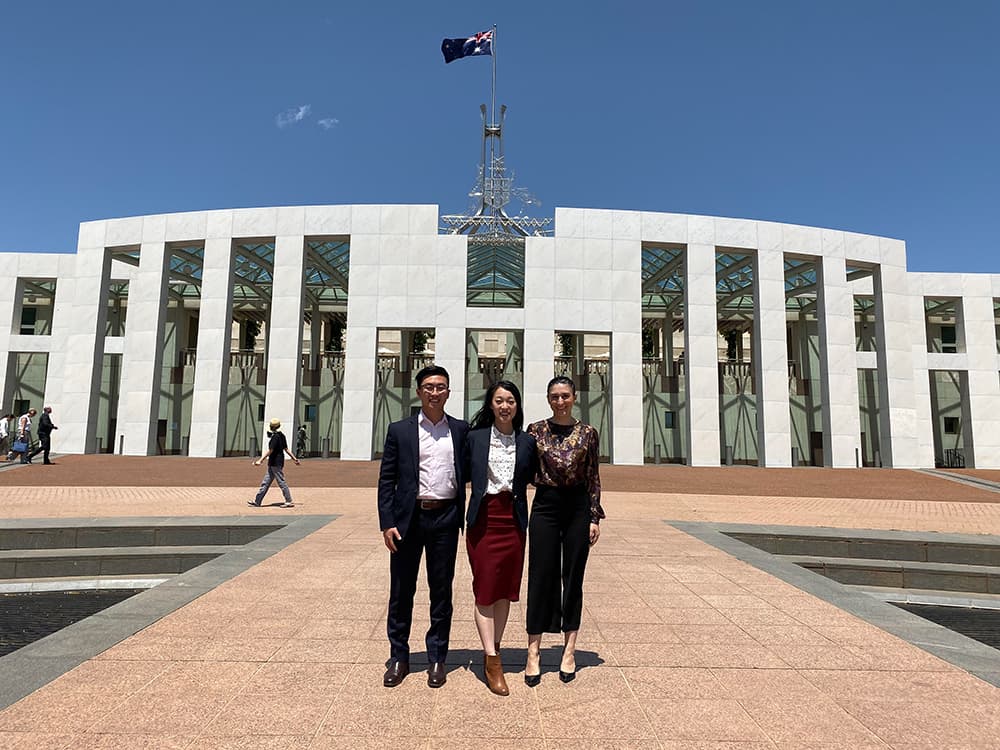 Not one to rest on her laurels, Isabelle is continuing her work in health policy and advocacy, taking on an executive role with the Australian Medical Students’ Association as Vice President External for 2020. It’s a role she is already relishing sinking her teeth into.

“It’s humbling focusing on future doctors’ advocacy priorities and representing the voices of over 17-thousand Australian medical students. It aligns with my values and where I want to go moving forward.”

“I have begun travelling to Parliament to meet with MPs and other state and national medical bodies and departments. I’ll be continuing to discuss a range of central priorities for medical students, including mental health and wellbeing, international student rights, the intersection of health and climate change, and the challenges facing Indigenous and rural and remote students.”

As part of the role, Isabelle said she will canvas the thousands of medical students around the country to ensure their priority concerns are being addressed. For the first time that will also include climate change and its impact on health. “This hasn’t been raised as a national priority impacting students before. It shows how climate change is emerging as a major concern for us.”

She said the increase in participation by JCU students on the national stage in teams and leadership roles has also been extremely positive, with local students increasingly drawing attention to the issues of rural, remote and Indigenous health.

With her agenda busily filling for the coming year, Isabelle is excited about the future, working to help improve health care and health equity for all.