May 2, 2018 marks twenty years since Martin Nakata received his PhD at James Cook University's graduation ceremony in Cairns, the first Torres Strait Islander to be awarded a PhD in Australia.

Marking the 20 year anniversary of the first Torres Strait PhD 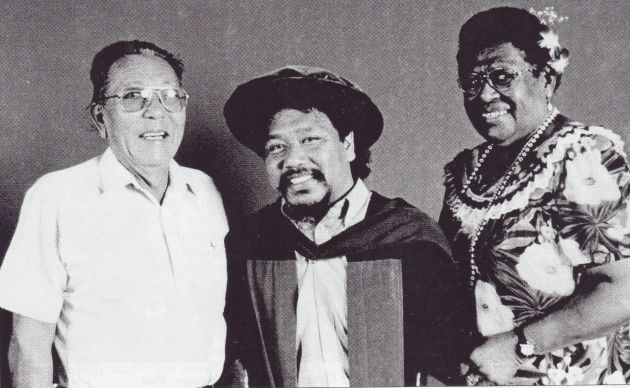 May 2, 2018 marks twenty years since Martin Nakata received his PhD at James Cook University's graduation ceremony in Cairns, the first Torres Strait Islander to be awarded a PhD in Australia. His thesis explored the interface of Western systems of knowledge and Torres Strait Islander positions and experiences. "I studied the literature produced on Islanders over the last century to learn more about what conditions the possibilities for Islanders. I was looking for a different angle on what constrains things today in the classrooms," he said.

Dr Nakata argued that educators must look beyond the simplistic notions associated with people's differences, and pursue new understandings of Indigenous peoples as they are positioned and re-positioned in the formal schooling process. Education departments must listen in a different way to Indigenous communities if they want to achieve better results.

"We've moved on from the missionary days and 'rescue' modes but they still need to learn how to open their ears and not their mouths," he said. "Instead of patronising people because they are different, educators must now learn how to make a difference. The first step towards this is for them to learn more about how they can not just be advocates of Indigenous peoples but advocates also of Western knowledge systems and conventions."

More than fifty of Dr Nakata's family and friends joined him in Cairns to celebrate, many travelled from the Torres Strait and around Australia for the ceremony. "Many people gave up a lot to help me along the way, so this is their achievement too — not just mine," he said, "I dearly hope that Indigenous families who have worked tirelessly over the years to support their children's education will take a bit of the glory today, and give themselves a pat on the back."

Since that day in 1998, Dr Nakata has made a significant impact in the field of Indigenous education and knowledge, becoming recognised nationally and internationally as a leading indigenous scholar. Now the Deputy Vice-Chancellor Indigenous Education and Strategy at James Cook University, in 2020 he was conferred with the Member of the Order of Australia for his service to tertiary education and indigenous student learning outcomes. His trailblazing achievement has paved the way for other indigenous scholars, with over 600 Aboriginal and Torres Strait Islander people currently enrolled in postgraduate research degrees throughout Australia.