Invasive flatworm discovered in Europe for the first time

One of the world’s most invasive pest species, the Platydemus manokwari, has been discovered in France and may have come from one of the island nations in the Pacific region, a JCU researcher has found. One of the world’s most invasive pest species, the Platydemus manokwari, has been discovered in France and may have come from one of the island nations in the Pacific region, a James Cook University researcher has found.

This species, also known as the New Guinea flatworm, has been found in a hot-house in Caen in France, the first discovery of the species in Europe.

The specimens were identified by their characteristic appearance and by the molecular analysis of that part of its DNA often used to characterise animals (its ‘barcode’).

Dr Leigh Winsor, Adjunct Senior Research Fellow in JCU’s School of Marine and Tropical Biology, has been collaborating with Professor Jean-Lou Justine of the Museum National d'Histoire Naturelle in Paris who heads a team on a project of invasive species of terrestrial flatworms in France.

Dr Winsor completed his PhD at JCU on terrestrial flatworms in the Australian region and regularly undertakes identifications of flatworms for people and organisations in the UK, US, Australia and the Pacific region.

Dr Winsor said many of the species identified were of Australian and New Zealand origin.

“One of the species recently forwarded for identification turned out to be the New Guinea flatworm  Platydemus manokwari, the only flatworm on the list of the 100 World's Worst Invasive Alien Species,” he said.

“It has a bad reputation in the Pacific region to which it was previously largely confined. It has now been transported to France and along with other austral flatworms, is causing some concern.”

Dr Winsor said the New Guinea terrestrial flatworm, first found in Manokwari, Irian Jaya in 1962, was later introduced to Bugsuk in the Philippines in 1981 and later on to Yokohama, Japan and the Maldives as a biological control agent for the Giant African snail, a crop pest.

It is a predator of native snail and possibly other soil animal species in the region, and biologists had grave concerns for the future of native land snail faunas of Pacific Islands where the New Guinea flatworm had been introduced, he said.

Dr Winsor said over the past 50 years the New Guinea flatworm was introduced probably together with plants and soil, and sometimes deliberately, to more than 15 territories in the Pacific region, including Australia, Guam, Palau, Hawaii, Federated States of Micronesia, French Polynesia and Samoa.

The most recent report of P.manokwari in the Pacific region is its occurrence last year in Rotuma in the Fiji archipelago and had become invasive endangering endemic species, he said.

“Although living on the ground, it is able to climb on trees to follow the snails,” he said.

“It is very flat, it measuring up to 50 mm long and 5 mm wide, its back is a black-olive colour with a clear central stripe, and with a pale white belly. The head is elongated, with two prominent black eyes. The mouth is in the middle of the belly.”

Dr Winsor said the New Guinea flatworm, while originally from the cool to cold highlands in New Guinea, it could survive relatively cool temperatures down to 10C.

“The flatworm has survived in the hot-house at Caen, and it is expected that it would also survive outdoors in this region, and even more easily in more warmer southern parts of Europe.

“Moreover, it was observed in the laboratory to be capable of consuming a European species of snail. Apart from the flatworm being a threat to snails, one of the main dangers of this case is that the diet of Platydemus manokwari is very diverse and in the absence of snails it can feed on numerous soil-dwelling species, including earthworms.”

Dr Winsor said the discovery represented a new and significant threat to biodiversity in France and Europe, which hosts hundreds of species of snails, some of which are endangered and protected. It was therefore important to implement an eradication and control program, he said.

Along with Professor Justine and others, Dr Winsor recently had a paper on this discovery accepted for publication by the online journal PeerJ.

Dr Winsor, who completed part of his MSc on the species, says the Platydemus manokwari is present in his backyard and also in many other gardens in Townsville.

The paper, The invasive New Guinea flatworm Platydemus manokwari in France, the first record for Europe: time for action is now is available here: PeerJ: https://peerj.com/manuscripts/1372/ 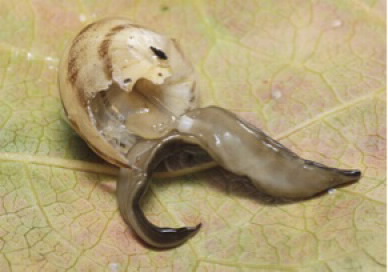 Image above:  Platydemus manokwari. Specimen collected in a greenhouse at Caen, France. Note its white pharynx protruding from the underside ingesting soft tissues of a specimen of the Mediterranean snail (Eobania vermiculata). Photo by Pierre Gros