Conservation scientists say there needs to be a new approach to protecting offshore marine reserves. 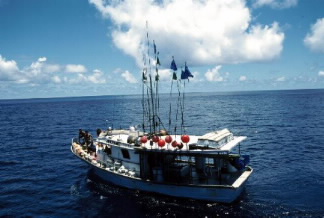 Conservation scientists say there needs to be a new approach to protecting offshore marine reserves.

Illegal fishing in marine reserves will be a major focus at the IUCN World Parks Congress, which has opened in Sydney.

Researchers at the ARC Centre of Excellence for Coral Reef Studies (Coral CoE) at James Cook University, who are attending the conference, have found a way to predict illegal fishing activities to help authorities better protect marine reserves.

Marine reserves are the most common strategy used to protect and maintain marine ecosystems around the world.

The International Convention of Biological Diversity aims to have 10 per cent of the world’s marine areas protected by 2020.

But scientists are concerned that while a great deal of effort is being made to create reserves, many countries are simply not able to enforce the laws that are supposed to protect them.

The vast majority of fishers obey the law, but some don’t.

“The success of protected areas depends on whether people comply with the regulations,” says Professor Joshua Cinner from Coral CoE.

He explains that the biggest problems facing countries trying to enforce offshore marine reserves are their distance from land and the difficulty and cost of patrolling large tracts of ocean.

“The distances to these areas can be very large. They are a long way from prying eyes and quite often the regulations are such that you have to actually catch people illegally fishing to prosecute them,” Professor Cinner says.

“It can be extremely difficult for authorities to catch illegal fishers in the act.”

In a bid to combat the problem, researchers at Coral CoE examined five years’ worth of data collected from the World Heritage-listed Cocos Island National Park, a unique marine protected area in the Pacific Ocean about 500 kilometres off the west coast of Costa Rica.

They found that illegal fishing was concentrated in a few ‘hotspots’ and ramped up during specific lunar phases of some months.

Professor Bob Pressey, also from Coral CoE, says authorities could use this knowledge to match patrols to the time and place when illegal fishers are most likely to be in action.

“Rather than just hoping you can catch illegal fishers effectively by random patrols, we have used previous patrols to look for patterns which tell us when and where people fish illegally,” adds Professor Cinner.

Study lead author, Coral CoE PhD candidate, Adrian Arias says the model of predicting illegal patterns from old records can be used to increase the success of patrols in other locations.

“Our research in Costa Rica showed how a systematic and periodic analysis of patrol records can help to increase the probability of catching illegal fishers. This could be done pretty much anywhere that patrol data are available,” he says.

“Targeting resources is particularly important for developing countries such as Costa Rica, which have taken on the conservation challenge but don’t have the same funding to ensure compliance as a country such as Australia.”