Australian and Chinese scientists have made significant progress in determining what causes soil acidification – a discovery that could assist in turning back the clock on degraded croplands. 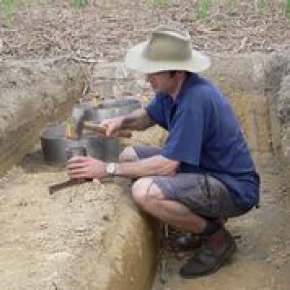 Australian and Chinese scientists have made significant progress in determining what causes soil acidification – a discovery that could assist in turning back the clock on degraded croplands.

James Cook University’s Associate Professor Paul Nelson said the Chinese Academy of Sciences sought out the Australian researchers because of work they had done in Australia and Papua New Guinea on the relationship between soil pH levels and the management practices that cause acidification.

Building on the JCU work, scientists examined a massive 3600 km transect of land in China, stretching from the country’s sub-arctic north to its central deserts. The work yielded a new advance that describes the mechanisms involved in soils becoming acidified.

Dr Nelson said soil degradation is a critical problem confronting humanity, particularly in parts of the world such as the tropics where land use pressure is increasing and the climate is changing. “We can now quantify the effect of, for instance, shutting down a factory that contributes to the production of acid rain,” he said.

The Patron of Soil Science Australia, former Australian Ambassador to the United Nations and for the Environment, The Honourable Penny Wensley AC, welcomed news of the advance.

“With 2015 designated by the United Nations as the International Year of Soils, this is a very important year for soil scientists around the world. We need to promote greater awareness of the importance of soils and soil health and the role soil science has to play in addressing national and global challenges.”

In the context of the International Year of Soils, Hon Penny Wensley said: “We want to encourage greater cooperation and exchanges between soil scientists, to accelerate progress in research and achieve outcomes that will deliver practical benefits to farmers and land managers, working in diverse environments.

“This research project, drawing on the shared expertise of soil scientists from Australia’s James Cook University and the Chinese Academy of Sciences, is an exciting illustration of what can be achieved through greater collaboration,” she said.

Acidification is one of the main soil degradation issues worldwide, accelerated by water leaching through the soil. It is related mostly to climate, and the overuse of nitrogen-based fertiliser.

“The greater understanding of soil acidification causes this study has delivered could help improve soil management practices, not only in Australia and China, but around the world,” said Penny Wensley.

The study has been published in the journal, Biogeosciences.

Link to pics and paper: http://bit.ly/1KsLogN
Please credit Paul Nelson or as marked.

2015 is the International Year of Soils. A UN mandated initiative to increase awareness and understanding of the importance of soil for food security and essential ecosystem functions. http://www.fao.org/soils-2015/about/en/