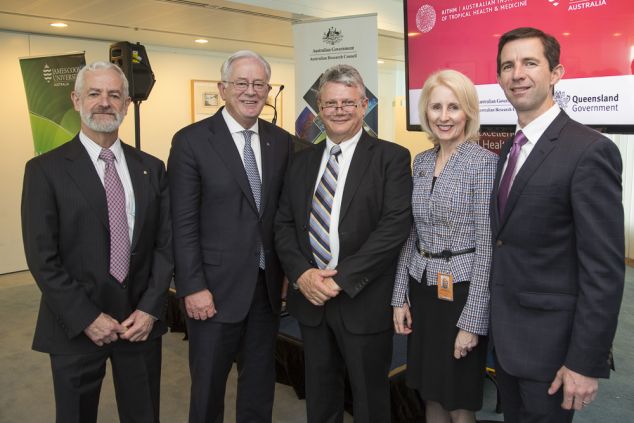 The Australian Institute of Tropical Health and Medicine (AITHM), at James Cook University (JCU) has been officially launched by the Federal Education Minister, Senator the Hon Simon Birmingham at a ceremony at Parliament House in Canberra.

The ceremony marks a special milestone for the emergence of AITHM, with James Cook University Vice Chancellor, Professor Sandra Harding stating that the official launch of AITHM demonstrates Australia’s position as a global leader in tropical health and medicine.

“Northern Australia’s proximity to the fast growing Southeast Asian and Pacific nations, both as part of the growing tropics presents extraordinary opportunities for Australian tropical medicine.”

“AITHM and JCU have developed a highly technical and advanced medical research capability and are well poised to respond to the scale of opportunity emerging from our near neighbours in the Asia Pacific,” Professor Harding said.

The official launch featured presentations demonstrating AITHM’s capacity building activities and showcasing a suite of research that is being translated into reality.

AITHM’s Director, Professor Louis Schofield said that, “AITHM is developing strong connections with organisations such as the Gates Foundation for research into malaria, and Johnson and Johnson in the development of therapeutics”.

“AITHM provides a key knowledge based industry for engagement with Asia and the Pacific in research, research training, transfer of knowledge and the commercialisation of research findings.”

“Australia has a bright future in tropical health and medicine and AITHM will play an important role in managing or eradicating many of the diseases specific to this region,” Professor Wronski said.