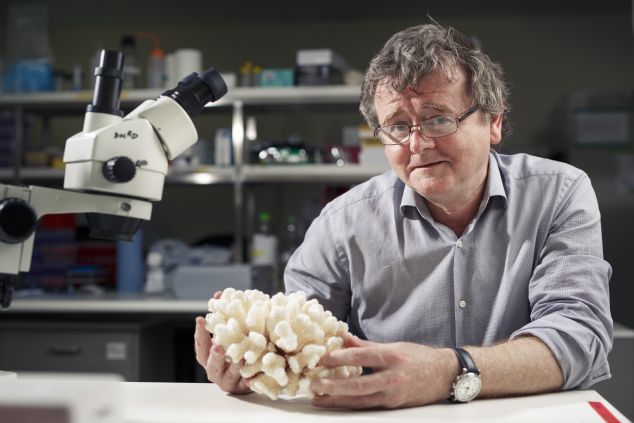 The prestigious science journal, Nature, has named Australian professor, Terry Hughes, as one of the elite list of ‘top ten people who mattered’ in the world this year, for his ground-breaking research on the worst-ever coral bleaching event on the Great Barrier Reef.

Professor Hughes, from the ARC Centre of Excellence for Coral Reef Studies at James Cook University, led teams of scientists who conducted aerial and underwater surveys across 2,300 kms of the Reef, documenting the severity of bleaching caused by global warming.  The research captured world-wide attention when dramatic video of the bleaching, taken by Hughes from a low-flying helicopter, went viral on social media.

The journal describes Hughes as a “reef sentinel” for keeping watch over one of Australia’s most precious icons. “It is an immense honour for our research to be highlighted by Nature,” says Professor Hughes. “This was the combined efforts of many researchers from ten institutions across Australia.”

“It was the saddest research trip of my life. We flew for four days over the most pristine northern parts of the Great Barrier Reef and almost every reef we saw there, consistently showed high levels of bleaching. It will take many years for these reefs to recover.”

Professor Hughes raised the alarm in March this year when record-breaking temperatures, predicted by the Australian Bureau of Meteorology, began to have an impact on coral health. He convened the National Coral Bleaching Taskforce which consisted of over 300 scientists from 10 research institutions across Australia, including James Cook University, the Great Barrier Reef Marine Park Authority, and the Australian Institute of Marine science, to coordinate the researchers’ response at a national level.

“We have now measured how much coral was killed by the bleaching, by returning after six months to re-survey the same sites underwater that were bleached in March. On average, 67% died in the northern section of the Reef. The good news is, the southern two-thirds of the Reef escaped with only minor damage.”

The scientist’s work is not over. “The message to people,” he told Nature, “should be we’ve got a closing window of opportunity to deal with climate change.”

Note: Professor Hughes recently gave a TEDx talk for JCU Cairns on saving the world’s coral reefs which can be viewed here: https://www.youtube.com/watch?v=x5LshSZn5RA