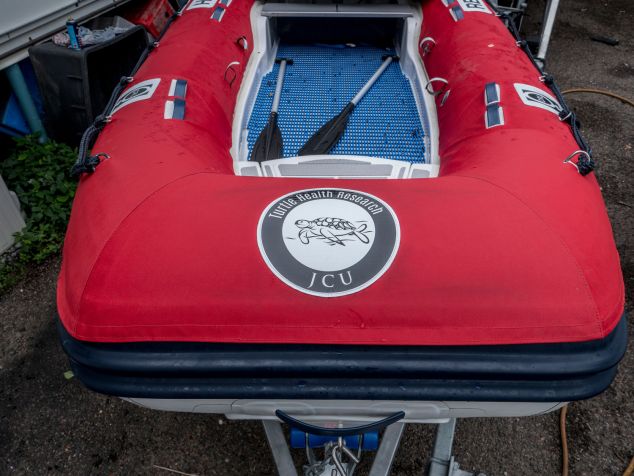 The Scorpion is set to join The Dragon in a boost to James Cook University’s marine turtle research.

The Scorpion is the new boat sponsored by Glencore to assist with research into turtle health. It will join its sister ship The Dragon in the role.

The boats are an ideal platform for scientists performing the spectacular ‘rodeo’ method of turtle capture (see video, below).

Associate Professor Ellen Ariel is head of the research team. She says there are several different projects currently assessing the health of turtle populations.

“The Scorpion will be in very high demand and invaluable to the research team for many years. Having the second boat will make research much safer and more efficient, with two research teams able to work together to pursue the turtles,” she said.

Dr Ariel said the JCU Turtle Health Research team will use the new boat to locate and catch turtles in shallow seagrass areas.

“We’ll be looking at vital data such as size and weight so we can determine the health of the turtles. Our main concern at the moment is the spread of the fibropapillomatosis virus, which is affecting green turtle populations near Magnetic Island,” she said.

“They’re both optimised for fast manoeuvrability in shallow waters, so they’re both small, feisty beasts. The names also give a bit of a lift to the spirits of the scientists and hopefully inspire them to keep going in the fight against turtle disease.”

“The ongoing success of the facility and the expansion of its operations has been made possible by the funds it has received from a range of donors over many years. Without such support, essential research into the health of turtles would not have been possible.”

“In 2009, Glencore invested in the setup of Reef HQ’s Turtle Hospital, and over a number of years we injected more than $30,000 to support the facility’s important work,” Mr Taylor said.

“Last year, we had the opportunity to expand on this base by establishing a new, $44,008 partnership with JCU, to fit out the turtle nursery at the university’s Turtle Health Research Facility.

“The addition of The Scorpion research vessel to JCU’s arsenal strengthens their ability to carry out their ground breaking research into turtle health and keep the Great Barrier Reef turtle populations strong,” he said.