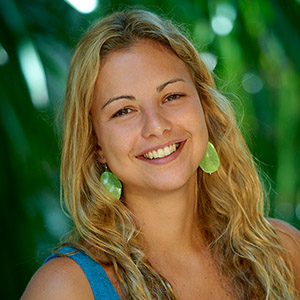 Dr Mariana Fuentes was born in Brazil and arrived at JCU as a 17-year-old to undertake a Bachelor of Science majoring in marine biology and environmental science. She completed her Bachelor with First Class Honours at JCU in 2004, before spending two years abroad with turtle and wildlife conservation programs in Barbados and Madagascar.

She then returned to JCU to start a PhD and in 2010 was awarded a Doctor of Philosophy in Science for her research into the impacts of climate change on marine turtles.  Her research was the first of its kind and has already generated 11 publications.

Currently she is a post-doctorate fellow at the Centre of Excellence at JCU, researching cost-management strategies for the conservation of marine mega-fauna such as sea turtles and dugongs.

As a case study, she is researching flatback turtles in Cape York and northern Queensland, and is providing tools to stakeholders on how best to allocate resources to conserve these animals.  She has written two children's books which are being used by teachers and rangers in the Torres Strait as part of their education programs

The first book was an adaptation of her PhD results into the impact of climate change on sea turtles, and has been used for a number of years.  The second, a story about dugong ecology, was launched last month.

She has worked with stake holders such as the Torres Strait Regional Authority and the Great Barrier Reef Marine Park Authority to influence conservation policies and improve management.

She has enjoyed learning for the indigenous communities of northern Australia and hopes to continue her applied research into the management of marine animals.