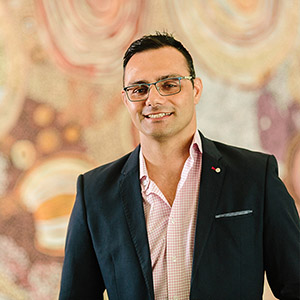 Dr Shannon Springer is the Discipline Lead for Indigenous Health at Bond University. He has been an outstanding advocate for the health of Aboriginal peoples and Torres Strait Islanders.

As one of the first two Indigenous graduates in the inaugural James Cook University medical cohort, he has been a role model and tireless worker in his commitment to improve the health of Indigenous Australians.

Dr Springer has worked across Queensland over the past 10 years, on the Gold Coast, and in Brisbane, Mackay, Palm Island and Mount Isa as both a general practitioner and in health consultancy.

Dr Springer, of Aboriginal and Australian South Sea Island descent, was born and raised in Mackay in North Queensland and moved to Brisbane on a football scholarship in 1997.

He also enrolled in a Bachelor of Applied Health Science in Indigenous Primary Health Care and moved to Townsville to study medicine when the program commenced in February 2000.

During his time at JCU he sat on the Board of the Townsville Aboriginal and Torres Strait Island Health Service, as well as serving as the student representative on AIDA.

He completed his internship at the Gold Coast Hospital and worked at the Royal Brisbane Women’s and Children’s Hospital, before moving into general practice when he returned to Mackay to work at the Aboriginal and Torres Strait

Islander Health Centre, where he has spent the past six years serving his community.

Dr Springer undertakes his clinical work by flying to Charleville to work at the Charleville and Western Areas Aboriginal and Torres Strait Islander Health Service, which is an Aboriginal Community Controlled Health Organisation.

He has also completed postgraduate training in general practice, and is a Fellow of the Royal Australian College of General Practitioners. He also received a 2015 Australian Government Office for Learning and Teaching's Australian Awards for University Teaching, and in 2014 won a VC Quality Award for Teaching Excellence.

Dr Springer graduated from James Cook University with a Bachelor of Medicine/Bachelor of Surgery in 2005 and received a Master of Public Health and Tropical Medicine in 2014.