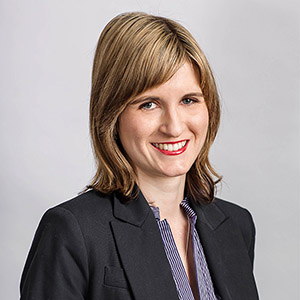 Katherine Andrews is a Senior Associate at MacDonnells Law, one of Queensland’s largest and longest established independent law firms.

Ms Andrews has established her reputation as one of the most successful family lawyers in Queensland.

She was born in Cairns, and after completing work experience at the then-MacDonnells Solicitors in Cairns in her final years of schooling, she realised her passion for advocacy, community involvement, helping people and making a difference.

After moving to Townsville to study a Bachelor of Laws at JCU, she began what was to become a ground-breaking career in family law.

During her studies, Ms Andrews joined the ranks of MacDonnells Law's legal secretarial pool in Townsville.

She progressed to a paralegal role before being appointed to a graduate position in their dispute resolution and litigation team in 2007. Ms Andrews then undertook the ambitious task of working and studying full time.

Towards the completion of the graduate program, she had the opportunity to work with many of Townsville's renowned barristers and gained extensive experience in family law.

In 2011, she relocated to Brisbane to build a family law client base under the supervision of one of Queensland's most respected family law partners, Don Macpherson.

Testament to this is that she has achieved seven reported precedent cases in family law and adoption. A precedent case is used within the federal jurisdiction by other practitioners and sets the benchmark for future similar cases.

solicitors will not attain one reported case in a long career.

Ms Andrews also has a rare aptitude for business development.

Since joining the firm, she has pioneered a professional networking and referral program called the 'Emerging Professionals Network' to encourage younger lawyers to network and establish referral relationships with accountants, financial advisers, bankers and real estate agents by way of hosting bi-monthly networking events.

Under Ms Andrews' leadership, MacDonnells Law's Emerging Professionals network now involves more than 250 young professionals across various industries in Brisbane and is a key source of referrals for the firm.

As a nod to her North Queensland roots, Ms Andrews established a defence law team for MacDonnells Law, which focuses on issues relevant to defence personnel and their superannuation entitlements.

Ms Andrews has also led the firm in supporting charity events such as the Great Brisbane Duck Race in support of cancer research and the MW Recruitment Swimming Carnival in support of research into motor neurone disease.

Katherine Andrews received a Bachelor of Laws from James Cook University in 2009.