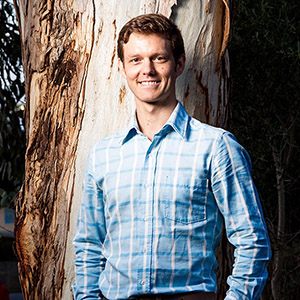 Dr Martin Breed is an Australian Research Council DECRA Fellow within the School of Biological Sciences at the University of Adelaide.

He completed his PhD in Plant Molecular and Restoration Ecology at the University of Adelaide in 2013. He was awarded the Dean’s Commendation for Doctoral Thesis Excellence and also received the South Australian Science Excellence Award for PhD Research Excellence in Life and Environmental Sciences.

He was awarded a South Australian Young Tall Poppy Award in June 2015 in recognition of his outstanding research and communication skills.

Dr Breed’s research has recently focused on using his expertise in biodiversity, environmental sciences, and native habitat restoration to develop greenspace designs that deliver economic and social benefits, as well as biodiversity outcomes.

He works with various organisations with funding from the Commonwealth Department of Agriculture, to develop pollinator habitat options to help safeguard agricultural systems against biosecurity threats to Australian honeybees.

Dr Breed is part of an international team from China, India and Europe that is developing novel environmental solutions to human health problems by constructing next-generation urban green spaces.

He is also the founder and curator of the National Provenance Trial database, which is informing the nation’s seed collection and restoration guidelines.

As well as being a JCU graduate, Dr Breed has a very personal connection to the university.

After receiving his Bachelor of Applied Science from JCU, he stayed in Uppsala to complete his MSc in Evolutionary Biology in 2008.

They moved to Adelaide in 2009, where he completed his PhD and Maria worked at the State Herbarium of South Australia.

They returned to Uppsala in 2013 where Dr Breed completed his postdoctoral degree. After returning to Adelaide in 2014, Dr Breed was awarded his ARC DECRA Fellowship.