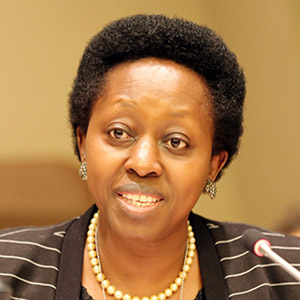 As a part of her role, Dr Kacyira has overseen the development and international adoption of the New Urban Agenda, which sets a new global standard for sustainable urban development and will help us rethink how we plan, manage, and live in cities.

Previously, Dr Kacyira held various government positions including as the Governor of the Eastern Province of Rwanda, the country’s largest province, where she oversaw the province’s development and urbanisation. She was also an Elected Member of Parliament and a member of the Parliamentary Standing Committee in charge of agriculture and livestock services, land use and management, settlement and the environment. While in these roles, Dr Kacyria participated in a range of legislative activities in parliament while also working to improve community mobilisation and sustainable development.

From 2006 to 2011 she was the Mayor of Kigali, where under her leadership the city won the 2008 UN HABITAT Scroll of Honour Award in recognition of achievements including high levels of cleanliness, safety and sustainability. Dr Kacyira was also instrumental in developing affordable housing initiatives and employment opportunities in the city.

As a trained veterinarian, Dr Kacyira worked in Rwanda with both civil society and government immediately after the genocide of 1994 by helping desperate families develop cattle farming, smaller livestock and public health initiatives and therefore played a role in the rebuilding of the country.

In 2016, she played a key role in the substantive and policy discussions of the UN Habitat III conference in Ecuador, which was the world’s largest conference on sustainable urban development. In this capacity and through her leadership role at the UN, she went out of her way to contribute to the Future of Tropical Cities, an official side event of the conference organised by James Cook University and the State of the Tropics Project, where she was a keynote speaker.

Dr Aisa Kirabo Kacyira graduated from James Cook University in 1996 with a Master of Science, majoring in Tropical Veterinary Science.