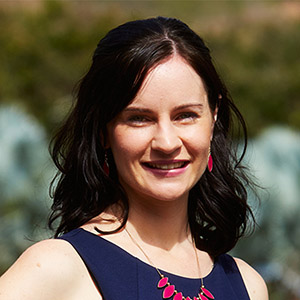 Sharell O’Brien is the supervising solicitor at the North Queensland Women’s Legal Service (NQWLS). She is a passionate advocate for ending violence against women, with a particular focus on domestic violence and ensuring women gain the support and services they need.

NQWLS is a not-for-profit community legal centre that specialises in family law and domestic violence legal matters. As the supervising solicitor, Ms O’Brien provides free legal advice to vulnerable women in North and Far North Queensland both directly and indirectly, through the overseeing of solicitors in the Townsville office.

She has wholeheartedly embraced her role at the North Queensland Women’s Legal Service. Approximately half of the women she has assisted have experienced domestic violence.

Displaying great leadership within her team and the community, Ms O’Brien actively looks for innovative ways to assist women who are affected by domestic violence and prevent the continuation of violence into the next generation.

Recognising the limitations of funding constraints, she has looked to technology for ways to share her message and developed a website called Ask Nola, which provides free legal education to community support workers in rural and remote locations via webinars, factsheets and referral information.

One of her current projects is developing a Skype program to enable NQWLS to provide free legal advice to women in rural, regional and remote locations in North and Far North Queensland.

As well as her role at NQWLS, Ms O’Brien also works on a number of projects to empower those who are most vulnerable, and promote ending domestic violence, by reaching out to schools, sporting groups and the wider community.

She was instrumental in establishing the Tackle Domestic Violence Campaign with the North Queensland Cowboys and the JCU Townsville Fire, a partnership aimed at raising awareness of domestic violence and the availability of free legal help and support.

She also works in partnership with the YWCA to deliver the Every Girl program to primary school students to teach them about human rights.

She is currently developing community legal education programs for schools to better assist them in dealing with families that are experiencing domestic and family violence and family law issues.

Ms O’Brien’s achievements have been recognised with her being named as a finalist for the 2015 Women’s Weekly Woman of the Future Award and as a Queensland finalist for the 2017 Young Australian of the Year. In 2016 she was awarded the ‘Top 30 under 30 Lawyer’ in the Pro Bono Category by Lawyers Weekly for her pro bono work.

Sharell O’Brien graduated from James Cook University in 2009 with a Bachelor of Laws.