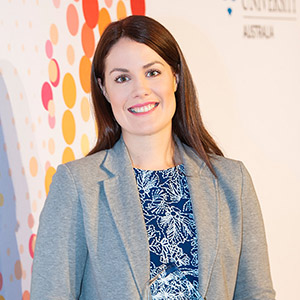 Dr Bronwyn Orr is a Scientific Officer (Companion Animals) at RSPCA Australia. Dr Orr aims to improve animal welfare throughout Australia and contributes significantly to the protection and welfare of animals on a daily basis.

Dr Orr’s work is vital to shaping Australia’s future in animal welfare. Her role involves research, providing information on animal welfare, and liaising with government and private institutions. Within this role, Dr Orr leads the RSPCA’s contribution to the Love is Blind campaign, a joint campaign with the Australian Veterinary Association to increase public and media awareness of the health and welfare issues experienced by dogs with exaggerated features.

Dr Orr works hard to deliver important messages about animal welfare to the general public and has appeared on radio and television to discuss current issues in Australia surrounding pets and animals. In particular, she speaks widely about her work with Love is Blind and the welfare issues associated with exaggerated features. Through these interviews, she is able to better inform members of the public to make educated decisions about pet ownership.

She also blogs for the RSPCA website and is a veterinarian at the RSPCA shelter in the ACT.

Dr Orr uses her capabilities to contribute to the community and constantly strives to help animals, whether domestic or wild. Outside of work, she is actively involved in many volunteer programs, including as a veterinarian and committee member of Pets in the Park, a charity that cares for animals owned by people who are homeless.

She is also involved with the Australian Veterinary Association where she is a mentor to new graduates and a committee member and policy advisory councillor to the Australian Veterinary Association Welfare and Ethics Special Interest Group. Her active engagement in these programs has had a positive effect on the local community and has also inspired others to become involved.

Dr Orr completed a Master of Science, majoring in International Animal Welfare, Ethics and Law at the University of Edinburgh and is currently undertaking a PhD from the University of Sydney on the health and welfare of pig hunting dogs in Queensland.

Dr Bronwyn Orr graduated from James Cook University in 2013 with a Bachelor of Veterinary Science.