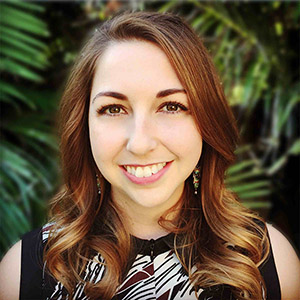 Dr Joleah B Lamb is currently a development fellow at The University of Queensland’s School of Civil Engineering and Cornell University’s Atkinson Center for a Sustainable Future. In January, Dr Lamb will be starting her own research laboratory as an Assistant Professor at the University of California.

Dr Lamb’s story with James Cook University began with a Master of Science in Tropical Marine Ecology and Fisheries Biology and continued with a PhD through the AIMS@JCU program, where she investigated the influence of marine-based industries on coral health and disease and received a Dean’s Award for Research Higher Degree Excellence.

Shortly after her graduation, Dr Lamb was awarded a highly competitive NatureNet Science Postdoctoral Fellowship by Cornell University and The Nature Conservancy. Her postdoctoral research on natural ecosystem filtration services led to the publication of a first-author and cover article in the 17th February 2017 issue of Science. Her ground-breaking research finding that the seagrass meadows of inhabited atolls near Sulawesi, Indonesia ameliorated seawater pollution from human-origination bacteria received international media attention, including articles in The New York Times, BBC, New Scientist and Nature.

Earlier this year, Dr Lamb published her second first-author article in Science on the discovery of billions of plastic items entangled in reefs across the Asia-Pacific region. She found that plastic debris stresses coral, giving pathogens a foothold for invasion, resulting in a 20-fold increase in disease once coral is draped in plastic. This study incorporated a wide network of collaborations from across Asia-Pacific, including Myanmar, Thailand, Indonesia, USA, and Australia. It also received global media attention and further demonstrated Dr Lamb’s exceptional scientific leadership.

Dr Lamb was recently awarded a prestigious Civil Engineering Development Fellowship by The University of Queensland and will join the Department of Ecology and Evolutionary Biology as an Assistant Professor at the University of California in 2019. It is anticipated that her new research program on engineering bio-inspired coastal infrastructure systems to remove pathogens will lead to further ground-breaking discoveries that inform the conservation of tropical marine environments worldwide.

Dr Lamb’s successes mark her as a rising star and a leading academic of the future. Her research has significantly advanced important areas of research about the health of corals and other major marine organisms in coastal environments. Going beyond merely documenting the demise of these systems, her research is helping to understand how human-related activities impact disease prevalence in reef populations. Importantly, her research has contributed to developing ways of managing human related disease drivers to mitigate population losses, with a particular focus on ecological processes at the point where land meets sea.

Dr Joleah B Lamb graduated from James Cook University with a Master of Applied Science in Tropical Marine Ecology and Fisheries Biology in 2009, for which she was awarded the University Medal, and PhD in Marine Biology in 2014 for her thesis “Influence of marine-based industries on coral health and disease.”