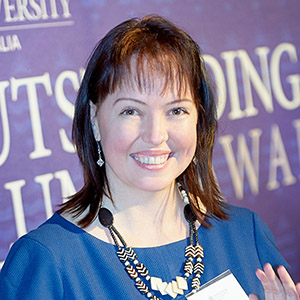 She contributes to the health care of those with a variety of medical conditions, including cystic fibrosis, psoriasis, and inflammatory bowel disease, and has participated in international campaigns to improve patient quality of life.

Dr Russo is regularly invited to speak at national and international events, and runs training workshops for medical staff and patients across Ireland.  As an academic, she specializes in phenomenological research.

Born in Ingham, Dr Russo has worked as a Clinical Psychologist in England and then in Northern Ireland and since 2001 at the Royal Belfast Hospital and from 2008 at Queens University as well.  She has been an official Belfast Ambassador since 2009.

In 1999 she witnessed her first Total Solar Eclipse and became hooked on the phenomenon and its impact on people.  Last year she returned to her home State as a dedicated “eclipse chaser” to observe her eighth total solar eclipse and delight audiences by delivering a series of talks on the Cairns campus.

She is now a specialist eclipse advisor for Independent Traveller, a UK based tour operator, and is in talks with the Faroe Island community in preparation for the Total Solar Eclipse in 2015.  Her next book, about the 2012 North Queensland eclipse, will be out in November.