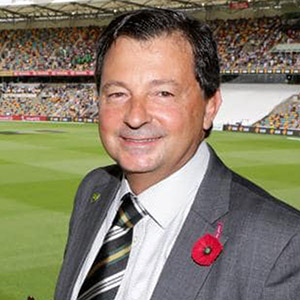 Mr Peever graduated from James Cook University with a Bachelor of Economics in 1978 and retired as Managing Director of Rio Tinto Australia this year after 27 years with the company.

He holds a number of other prominent positions.

He is Deputy Chairman and Chairman elect of Cricket Australia, a non Executive Director with the Australian Foundation Investment Company and the Melbourne Business School.

He sits on the Prime Minister's Indigenous Advisory Council and Chairs an eminent persons panel appointed by the Minister for Defence to undertake a First Principles Review of the Defence Department.

He commenced and Economics degree at James Cook University in 1975 and each of his three years was recognised for academic success by receiving industry awards.

After graduating he joined the National Bank and eventually moved to Rio Tinto where he started what was to become a global career in the resources sector.

He worked across disciplines and commodities in Strategy, Human Resources, Marketing shipping and Policy.

With Rio Tinto he and his family lived in many parts of Australia as well as Singapore, Los Angeles and London.

He was born in Charters Towers and along with his brother George attended State schools across Queensland as their father was on regular transfer with the banking sector.

Despite the challenges of moving around the State during his schooling years, Mr Peever showed his leadership abilities early, being appointed School Captain at Kilcoy State High School.

While at JCU, David played cricket for University, Townsville and North Queensland before moving to Brisbane where he played First grade for Eastern Suburbs for a number of years.

With all his many and varied life accolades and accomplishments, Mr Peever is an exemplary example of what a humble “boy from the bush” can achieve. However, nothing is more important to David than his family having been married to Christine for 35 years, with whom he has two high-achieving daughters, Sara and Nerida.