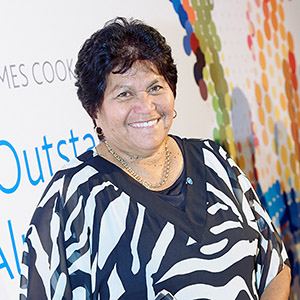 Professor Smallwood has been an outspoken advocate for the rights of Aboriginal and Torres Strait Islander peoples since 1968. She grew up in Townsville and was a teenager when the 1967 national referendum on changing the Australian constitution to give Aboriginal people the right to vote was held.

Dr Smallwood grew up determined that she would break through the barriers of racism.

She trained to become a Registered Nurse, midwife and in mental health and went to work in communities such as Alice Springs, Palm Island, remote Western Australia and South Australia.

In 1974 she worked as a volunteer RN during the establishment of the Townsville Aboriginal and Islander Health Service. She has also worked with the late Dr Fred Hollows on the National Trachoma and Eye Health Program.

In 1986 she was Queensland Aboriginal of the Year and in 1993, Dr Smallwood was the first Indigenous Australian to receive a Masters of Science in Public Health (JCU) for her work on HIV education in North Queensland Indigenous communities. She was then awarded the Australian Medal (AM) for her work in public health.

She has been employed as an advisor to the World Health Organisation on HIV-AIDS and Indigenous communities; the Queensland Health Minister Ken McElligott and Queensland Minister for Family Services Ann Warner because of her expertise on health and domestic violence inequalities.

In 1994 she became the first woman, first Indigenous person and first non-paediatrician to receive the Henry Kemp Memorial Award at the International Society for Prevention of Child Abuse and Neglect.

Dr Smallwood also completed a Diploma in Indigenous Mental Health, and has worked with acute and chronic psychiatric patients, Indigenous and Non-Indigenous, for many years.

In conjunction with Professor Ian Wronski, Dr Smallwood was the principal author of the Interim Set of Goals and Targets in Aboriginal and Torres Strait Islander Health, 1991 – the first set of quantitative targets for Indigenous health in Australia.

In 1997, Dr Smallwood was invited to be special guest for the then South African President, Mr Nelson Mandela and she used the time speaking with activists including the sons of the late Steve Biko, and giving HIV-AIDS prevention talks and workshops. She was one of the small group of health practitioners who understood the risk of HIV-AIDS in Indigenous communities, and developed the now mainstream and famous Condoman to promote safe sex in a culturally appropriate way.

In 2007, Dr Smallwood received the Deadly Award for Outstanding Lifetime Achievement in Indigenous Health and until 2011 held a part-time role as Special Advisor to the Vice Chancellor on Indigenous Matters at James Cook University.

In 2011 she completed her PhD Thesis Human Rights and First Australians Well-being; Dr Smallwood was the first Indigenous PhD graduate in the Faculty of Medicine, Health and Molecular Sciences at James Cook University.

In October 2013, Dr Smallwood was awarded the United Nations Association of Australia Queensland Community Award - Individual, in recognition of service to public health, in particular HIV-AIDS, contribution to Australian universities, and consultation to the World Health Organisation.

In 2014 she was awarded the NAIDOC Person of the Year Award and appointed a member of the Queensland Mental Health and Drug Advisory Council.