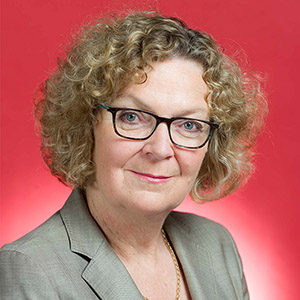 Jan McLucas was an Australian Labor Party member of the Australian Senate representing Queensland from 1999 to 2016; the only graduate of James Cook University to be elected to the Federal Parliament.

Born on the Atherton Tablelands, she was educated at the local primary school in Ravenshoe, then at Clayfield College in Brisbane.

She was the first in her family to attend a tertiary institution and recognises the transformative influence of education on life outcomes.

Jan trained as a primary school teacher and during her studies held the positions of Treasurer and President of the Student Union.  She was the first woman to be elected as President and served as a member of the Academic Board.

Enjoying a 10-year primary school teaching career in State schools, mostly in North Queensland from 1979 to 1989, Ms McLucas spent most of these years in smaller regional schools, including as the Principal of Hayman Island State School.

She was active in the Queensland Teachers' Union and a number of professional organisations.

She began her career in public life when she was elected as a Councillor of the Cairns City Council in 1995 representing residents in the western suburbs of Cairns.

Elected to the Senate at the 1998 election, her Parliamentary roles included chairing the Senate Select Committee Inquiry into Medicare and the Inquiry into the institutionalisation of children - now known as the Forgotten Australians Inquiry.

She also introduced a Private Senator’s Bill to ban oil exploration and drilling near the Great Barrier Reef.

She was Chair of the Senate Inquiry into services for people with disabilities, which resulted in the National Disability Strategy.

This provided the policy foundation for the development of the National Disability Insurance Scheme, or NDIS.

She has said that her long involvement in this field is the most satisfying public policy work she has been privileged to be a part of.

Ms McLucas retired from the Senate in May 2016.

Jan McLucas graduated with a Diploma of Teaching degree from the Townsville College of Advanced Education, now James Cook University, in 1978.