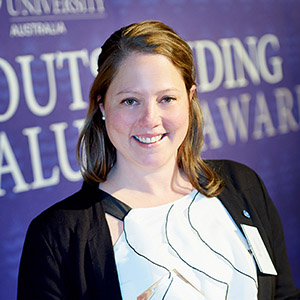 Joanna Mather covers national affairs for the Australian Financial Review from the national newspaper’s Canberra bureau with particular emphasis on  education, and this year was named the Higher Education Journalist of the Year by Universities Australia and the National Press Club.

Born in Cairns and raised on the Atherton Tablelands, Ms Mather’s career began with some part-time communication work at the Great Barrier Reef Marine Park Authority. In 2000, she joined the Townsville Bulletin as a cadet and was named one of six national finalists for News Limited Cadet of the Year.  After two years at the newspaper she joined the University as media liaison officer based on the Townsville campus.

Two years later she headed to London where she worked as a reporter on the Ilford Recorder.  On her return to Australia, Ms Mather initially worked as editor of Nursing Review and then as the senior journalist for Campus Review.

She joined the Australian Financial Review in 2008, spending some years in the newspaper’s Sydney bureau concentrating on the higher education sector before being transferred to Canberra in 2012.

The annual higher education media awards reward and recognise excellent journalism and communication that covers key issues in higher education including the economic and social benefits emanating from Australia's universities to the government, industry and the community in general.

In 2009, Ms Mather won the Award for Excellence in Communicating Research and Innovation Issues, a sub-category of the Universities Australia awards.

Ms Mather graduated from JCU with a Bachelor of Journalism in 1999.