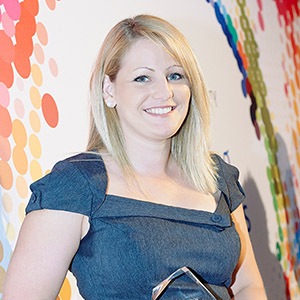 Ms Ambrosio graduated from James Cook University in 2005 with a Bachelor of Business and is currently the Business Development Manager at Outsource Management Pty Ltd, based in Cairns.

Ten years ago, Ms Ambrosio secured work on a short-term research project with Outsource Management through JCU Careers Hub, and was consequently offered a full time role with the firm in business consulting.

Commencing at Outsource Management as a Graduate Consultant in 2005, Ms Ambrosio's career progression within the company lead to her appointment as Business Development Manager in 2011.

Ms Ambrosio has successfully carved out a niche and built a reputation as the grant and tender writing specialist in North Queensland.

She has been responsible for successfully attaining over $40 million in Government grants and tender contracts on behalf of an extensive portfolio of corporate and not-for-profit clients across Queensland.

This was the catalyst that saw her listed on the inaugural 2013 Australian Institute of Management (AIM) Qld & NT AIM30: Thirty Under Thirty Managers Making a Mark list.

Ms Ambrosio was the only Far North Queensland name to feature on the list, from a pool of 1,750 applicants across Queensland and the Northern Territory.

In 2013, Andrea was a Young Manager of the Year finalist in the Cairns region Australian Institute of Management Excellence Awards.

Andrea has contributed  significantly towards the development of tomorrow's leaders of Cairns and Far North Queensland through her involvement on boards and committees of several community organisations.

Ms Ambrosio was selected as a Cairns Young Chamber (CYC) Subcommittee Member in November 2008. During her four-year term she was awarded a Cre8ing Leaders of Tomorrow Scholarship, appointed CYC Event Advisory Group Coordinator to lead strategic planning of CYC events, as well as a member of the CYC Advisory Subcommittee.

Andrea has been a member of the Business Liaison Association (BLA) Executive Committee since 2013, and is the Coordinator of the organisation's Business Planning Competition for high school students.