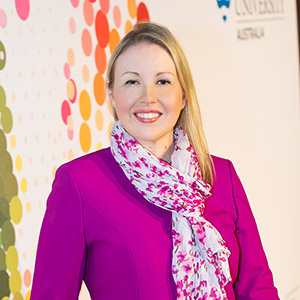 Ms Carr enjoys working for some of the largest property groups and corporations in Australia and internationally, including Stockland, Frasers Property, DEXUS, Telstra, Woolworths, Revlon, AMP Capital, and Glencore, where she has handled transactions valued up to $1.4 billion.

Ms Carr is passionate about making a difference and invests her spare time in mentoring, supporting the firm’s pro bono initiatives, supporting the firm’s LINK committee (for the LGBTIQ employee base and broader community), and organising and speaking at legal educational seminars and functions. Ms Carr has also completed two 12-week Mandarin courses around her day-to-day work at KWM.

More recently, Ms Carr was selected by KWM to be the mentor for the recipient of the King & Wood Mallesons “Aspire Award”. The annual award, involving a $9,000 grant, is presented by the firm to a regional high-school student who has demonstrated academic excellence and relentless effort.

Ms Carr commenced her legal career while studying and worked as a law clerk with a local Cairns firm where she gained considerable experience across several areas of law, including appearing in court, which is a task normally reserved for senior solicitors. Her commitment to surpassing the expectations of her supervisors and clients led to an opportunity to commence full-time work at Preston Law, the largest law firm in Cairns, following her final university exam.

One of many milestones in Ms Carr’s three years at Preston Law was being selected by the Cairns Chamber of Commerce to participate in the “Emerging Leaders” Development Program, during which time she was mentored by the Honourable Justice James Henry of the Supreme Court of Queensland.

Ms Carr spent the next two years working in Brisbane for CBD law firm, Broadley Rees Hogan and was among the team named in the 2015 and 2016 ‘Doyle’s Legal Guide’ for ‘Leading Property and Real Estate Law Firms – Brisbane’. While in this role, Ms Carr was selected to undertake a secondment with top 300 ASX listed company Collins Foods Limited.

In 2017, she was appointed as the Chairperson of the Brisbane Committee for Special Olympics Australia and opened the annual ‘Inspirational Women’s Breakfast’ in front of over 200 corporate professionals.

During her time at James Cook University, Ms Carr spent three years as a student mentor, assisting many first-year law and business students with their transitions to university.  In addition to carrying out the responsibilities expected of a student mentor, Ms Carr was invited to speak in first year lectures to advocate for the program, and more uniquely, step in to run a legal writing workshop in Orientation Week, which was normally delivered by a law lecturer.

Tracy Carr graduated with a Bachelor of Business – Bachelor of Laws from James Cook University in 2013.