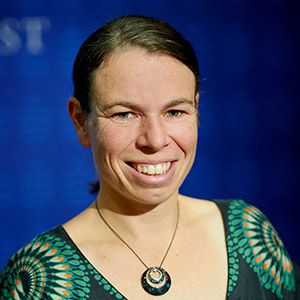 Dr Jan Strugnell is a Senior Lecturer in the Department of Genetics at La Trobe University and the first JCU alumnus to receive a Rhodes Scholarship to study at Oxford University.

She graduated from James Cook University in 1999 with a Bachelor of Science Honours (first class) in Aquaculture receiving both a Convocation and University Medal for academic excellence.

Throughout her time at JCU, Dr Stugnell was an active member of sports and community groups and she continued these activities in the UK, representing Oxford in both rugby and cricket.

Graduating with a DPhil in Zoology in 2005, Dr Strugnell was awarded a fellowship to pursue her research on population and higher-level genetics of Antarctic octopus.  Based out of the British Antarctic Survey in Cambridge (UK), she participated in two lengthy expeditions to Antarctic waters to collect octopus for her research.

Receiving a second fellowship based at Cambridge University she investigated evolutionary relationships in Arctic and Antarctic species and over the next two years published numerous scientific research papers, and contributed to major collaborative projects such as the Census for Antarctic Marine Life.

In 2010, Dr Strugnell returned to Australia to take up a lectureship at La Trobe and has since received funding from the ARC to understand the genetic basis of heat stress response in commercially valuable Abalone, and also from the Australia and Pacific Science Foundation to continue her work on Antarctic octopus genetics.