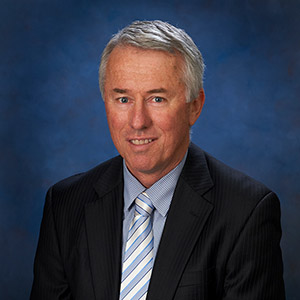 John Gunn is the Chief Executive Officer of the Australian Institute of Marine Science, and a Fellow of the Academy of Technological Sciences and Engineering.

Since leaving JCU in 1979, Mr Gunn has had an extensive and impressive career in the field of marine science.

He was first employed by the CSIRO as an Experimental Scientist Grade 1 in 1980 and rose to become Deputy Chief of Marine and Atmospheric Research – then CSIRO’s largest Division.

In 2008 he was appointed Chief Scientist of the Australian Antarctic Program and in 2011 became AIMS’ CEO, a job he describes as the “best science job in Australia”.

As an institutional leader, Mr Gunn has played crucial roles across a broad suite of areas. This experience has lead to membership on key boards, such as the Australian Integrated Marine Observing System; the National Marine Science Committee, which he chaired for four years; the Prime Minister’s High Level Coordinating Group on Climate Science; the Great Barrier Reef Advisory Committee; the Marine National Facility Steering Committee, and the National Science, Technology and Research Committee.

He also plays key roles in the international science community, including as co-chair of UNESCO’s Global Ocean Observing System Steering Committee and the Chair of the International Advisory Board to the Institute of Oceanology, Chinese Academy of Sciences.

In addition to his leadership roles and accomplishments, Mr Gunn has an international reputation as a forward-thinking and inspirational scientist.

He was a leader in developing and using innovative approaches and technologies for understanding the movement and structure of fish populations, and in particular the migratory tunas, billfishes and sharks of the open ocean.

He has published 60 peer-reviewed technical papers and book chapters, and more than 100 major reports and contributions to national and international fisheries commissions.

He was at the forefront of the CSIRO’s efforts to drive the application of his own work, and that of teams and programs he was leading, to the management of pelagic (pron: peh-LAH-jik) fisheries around Australia and the world.

His dedication to solving applied science questions that can improve the management and conservation of marine resources has been of enormous benefit to Australia and many other nations.

His career progression alone stands as an inspiration to JCU students and to those in junior science positions in the institutions where he has worked.

John Gunn completed a Bachelor of Science, with Honours, at James Cook University in 1978.