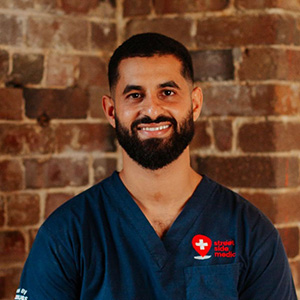 Dr. Daniel Nour completed his Bachelor of Medicine and Bachelor of Surgery at James Cook University in 2019. It was during his clinical elective at London’s Imperial College that Daniel was confronted by the inequalities faced by society’s most vulnerable people when accessing healthcare systems.

Returning from the UK Daniel realized similar inequalities with Australia’s health care system and from there the idea for Street Side Medics was born.  Daniel spent the next year, and his life-savings, bringing to life his concept of a medical van providing free general practice and allied health services to homeless people in Sydney. At just 26-years-old, the resident doctor saw a major gap in NSW health services, prompting him to launch the not-for-profit, Street Side Medics, in August 2020.

The mobile medical van is staffed by a team of 200+ volunteer GPs, trainee doctors and allied health professionals and works to treat Sydneysiders experiencing homelessness, some of whom may not have seen a doctor for a decade or longer.

But Daniel’s vision doesn’t stop there. Street Side Medics has recently put a second van on the streets and is working to expand the service to areas of need across Australia. The appointment of a full-time CEO will help the NFP expand and allow Daniel to focus on his Basic Physician Training (BPT) at the Royal North Shore Hospital where he aims to specialize in cardiology.

Daniel credits JCU for instilling in him the impact of community health initiatives and teaching him about socially diverse cultures and communities and the need to be culturally appropriate and socially accountable. JCU’s unique focus on rural and remote medicine as well as Aboriginal and Torres Strait Islander healthcare first attracted Daniel to Townsville to undertake undergraduate study.