This is Uni Facing the future: Machine learning and your face

Facebook knows who you and your friends are the moment you upload your photo. Snapchat animates rainbow vomit when you open your mouth. How do they know you and your face? And should we be worried?

If you’ve uploaded a photo of people to Facebook lately you will have experienced speed at which it can accurately recognise every person in the photo.

It’s all thanks to an artificial intelligence system developed by Facebook called DeepFace which uses algorithms to analyse new photos by using existing photos as a reference.

JCU IT Professor Ickjai (Jai) Lee explains it like a baby robot which needs to be taught:

“Once these networks are trained it’s actually very quick to do,” PhD student Aidan Possemiers says. “It uses the old images of you to generate the information. You get more accurate detections the more images they have on Facebook.”

This is why occasionally Facebook can get it wrong and tag inanimate objects as people, or not recognise someone at all.

“The amount of errors it will make is directly proportional to the number of accurate pieces of data it can draw upon when it was trained,” Aidan adds.

When it comes to vomiting rainbows or wearing a flower crown, Snapchat does things a little differently. It relies on the similarities of faces to identify key features and apply animations when they move.

“Human faces have very little variance between them,” Aidan explains. “Once a feature is known, due to the similarities between people, it doesn’t need to be relearnt by looking at a new person it’s never seen before. It’s a simpler, more general purpose solution that doesn’t have to be trained other than to know what these key features look like.”

As machines learn more and more about our faces, is it something we should be worried about?

“I think I’m worried, to be honest,” Jai admits. “Face recognition, IoT, those are pretty much everywhere. But the studies in privacy in these areas are relatively neglected.”

But for Aidan, it’s just a fact of contemporary life.

“I see it as an inevitability we will have to deal with,” he says, “The data is out there already. There’s so much data about you that you don’t even realise. It’s getting to the point where people need to realise that privacy is something you might not have.”

Get ahead in the new IT revolution with JCU Information Technology. 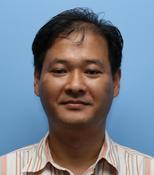