It’s killed 1 billion people worldwide, and available treatments are becoming ineffective. Australian scientists are now racing against the clock to find a better solution to the tuberculosis crisis.

In the past 200 years, tuberculosis (TB) has killed more than 1 billion people worldwide. It’s an ongoing crisis, with more than 53 million of these deaths having occurred since the year 2000.

More than 10.4 million cases of TB were documented in 2016 alone, and around one-third of the world’s population is currently infected with either an active or latent form of the disease.

In its most prevalent form, TB manifests as a severe, highly contagious, and potentially deadly lung infection. In children, TB can also spread into other organ systems – the bones, brain, liver, skin – and is often fatal.

Dr Andreas Kupz from the Australian Institute of Tropical Health & Medicine at James Cook University says that while TB is considered treatable, this treatment is not only time-consuming and costly, it’s starting to become ineffective.

TB is caused by bacteria called Mycobacterium tuberculosis, and since the 1950s, treatment has largely involved an intensive regimen of three antibiotics over the course of six to nine months. For the most part, this approach has been effective, but over the past decade, the number of strains becoming resistant to these drugs has increased every year.

Treatment of drug-resistant TB requires administration of extremely expensive drugs for up to two years, and stringent quarantine protocols. Ultimately, this can cost as much as US$200,000 per case, which has a severe impact on the already overwhelmed health systems of developing countries, where most of these cases arise.

Australia’s closest neighbour, Papua New Guinea (PNG), is one such country with a high TB burden. TB already kills more people there than any other infectious disease, and now PNG is experiencing an increase in the multi-drug resistant form.

Another critical issue is the fact that new treatments are proving difficult to develop.

That’s why he wants to prevent TB infections from taking hold in the first place.

“There’s clear evidence that vaccines work,” he says, pointing to the vaccines that have led to the eradication of smallpox and near-elimination of polio. Vaccines for diseases from tetanus to influenza play a vital role in managing the global infectious disease burden.

The current vaccine for TB, called BCG, has been in use for almost 100 years. It’s a live attenuated vaccine, meaning it uses a weakened (or attenuated) form of the organism that causes the disease.

BCG is based on a strain of mycobacterium that causes tuberculosis in cattle. In the early 1900s, scientists were able to isolate a strain that did not cause the disease, but triggered an immune response against the form of TB that affects humans.

“Today, BCG is one of the most widely administered vaccines on the planet,” says Dr Kupz. But while it’s very good at preventing the childhood version of TB, it doesn’t prevent the more common and contagious pulmonary form of TB.

The question is, can BCG be improved so that it can? This is where things get interesting.

In the late 1990s, researchers discovered that BCG lacks a genetic ‘island’ called RD1, which contains the genes for that devious secretion system.

The RD1-free version of BCG is therefore safe to administer, because the mycobacterium can no longer secrete the effector molecules that allow it to safely hide out in our immune cells.

But, as it turns out, you need RD1 if you want to generate an immune response to the pulmonary form of TB.

When researchers put RD1 back into the BCG vaccine, the vaccine triggered a more effective immune response, but was too dangerous to administer to humans.

Intrigued, Dr Kupz wondered if, instead of using RD1 in its entirety, he could just use a small part of it. Together with his team at JCU, he’s recently discovered that one of those effector molecules can do the trick; it can successfully induce a strong immune response.

Dr Kupz now wants to add this effector molecule to BCG to see if it produces a more effective vaccine. He also wants to improve the way TB vaccines are administered in the first place.

“TB is primarily a lung disease, but the BCG vaccine is given in your arm,” he says.

For decades, the prevailing idea has been that, regardless of what part of the body you inject a vaccine into, the entire immune system would learn from it equally.

“However, over the past 10 years or so, we’ve developed a much better understanding of which immune responses are needed locally to protect against a disease,” says Dr Kupz.

It’s now known that local immune cells can make a big difference to a vaccine’s effectiveness, so the site of vaccination might be important after all.

Experiments with mice have shown that an inhaled BCG vaccine is more protective than an injected one, and Dr Kupz and his colleagues have found that when BCG is administered via the lungs, the vaccine is able to cross the mucosal lining, and trigger an increase in local immune cells called ‘tissue resident memory T-cells’.

But of course, there’s a catch.

“These resident cells do not stay in the lung for a long time. They disappear after about six months,” says Dr Kupz.

“My research is focused on understanding how can we generate more of those cells in the lung, and how can we make them persist for longer periods of time.”

Ultimately, Dr Kupz wants to know what would happen if he could improve the BCG strain, and administer it directly into the lung.

The hope is that it would prevent pulmonary TB and generate lifelong protection, and thereby curb transmission of the disease around the world.

Something like that could finally put the eradication of TB within reach.

If you have a passion for improving the health of communities, find out what more about JCU Public Health and Tropical Medicine. 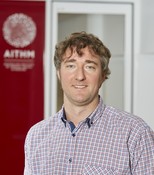