If information is power, the Great Barrier Reef has an unlikely formidable ally. Combining the clever use of data with automation, the Internet of Things (IoT) Smart Irrigation System aims to reduce runoff to the reef and adjacent coastal wetlands. On top of this, farmers could be tasting sweet success with higher yields for minimum effort.

Stunning coral isn’t usually the first thing that springs to mind when you visit a sugarcane farm, but for JCU’s Dr Eric Wang, the two are connected. His vision of a smart irrigation system has him pumped for the future of agriculture and the Great Barrier Reef.

“We have a large farming industry in Australia, but we also have a reef to protect,” Eric says. “The main benefit of the IoT Smart Irrigation System will be the reduction of runoff that damages the reef. The system will also have other benefits, including saving time and using a scientifically proven model.”

Reducing the amount of water running off agricultural lands, and improving its quality is a major part of protecting the long-term health and resilience of the Great Barrier Reef. This includes reducing the losses of sediment nutrients, particularly nitrogen, from farm fertilisers. Reducing the amount of farm runoff can reduce the build-up of pollutants in sediments and marine species, as well as improving available sunlight to sea grasses and corals.

Eric has gone to the beginning of this chain reaction to examine how irrigation can be improved to reduce runoff from sugarcane farms. He has worked with farmers in the Burdekin, North Queensland, to trial the IoT Smart Irrigation system, which uses data and automation for optimal water use. Each farm has a base station and is divided into paddocks. The base station houses control units that operate the valves for the irrigation pumps to each paddock. The farmer uses a personal computer to manage when the valves are on or off.

“One of our farmers has a 100-hectare sugarcane farm,” Eric says. “Prior to automation, he had to go to the farm several times a week and occasionally multiple trips in a single day to turn the pumps for irrigation on and off. His home is about 33 kilometres from his farm, so it took him a lot of resources in money and time to do this. The auto-irrigation system was set up with the base station in a shed on his farm and he can operate it from home.”

A demonstration model of the IoT Smart Irrigation System operates at the Community Garden at JCU’s Smithfield campus in Cairns. Image: Eric Wang

To assist with scheduling irrigation events, the farmer used a sugarcane crop model. The sugarcane crop model uses information, such as soil type, planting dates, and local weather data to calculate the daily water usage of each crop. From this information, the farmer was then able to determine the timing and volume of water to be applied to each field. However, this required the farmer to interact with two independent tools and manually transfer irrigation information from the automation software to the crop model. In a typical year, this farm has more than 1,000 separate irrigation events, making the information transfer a time consuming and tedious task.

“Prior to automation, the original irrigation system was not very smart because you had to manually turn it on and off,” Eric says. “The system was also based on the individual farmer’s experience in knowing how much water you need to apply to the crops. In the new system, we will automatically input the information and the model will calculate the optimum amount of water to apply and when would be the best time for irrigation. This will reduce the likelihood of using too much water, which results in runoff.”

Eric says this is just the beginning of smart irrigation. He would like to incorporate moisture, humidity and temperature sensors as well as camera monitoring into the system.

“If we have greater data input, we can make better decisions,” he says. “These sensors would provide more insight into the growth of the plants for the model, which can then operate the valves. The farmer will save time, while knowing the smart system is turning irrigation on and off and monitoring flows and pressures.”

Eric hopes the trials will prove that as well as saving time, the smart irrigation system will produce greater crop yields. This could be the key to attracting more farmers to adopt the system.

“Only two farmers use this system and they are in the Burdekin,” Eric says. “There are hundreds of sugarcane farms and farmers. We want to use the farms in the Burdekin to demonstrate that this is the time for agriculture to embrace this technology.”

Agricultural technology will not be limited to sugarcane farmers. Eric hopes to plant the seed of innovation across the agricultural industry and would like to collaborate with other farmers to develop tailored IoT Smart Irrigation Systems.

“We want to encourage more farmers to adopt this technology,” Eric says. “I would love to talk to banana and mango farmers in Far North Queensland. What we are doing with sugarcane is universal, we just need to develop the corresponding model for the crop. Agriculture is just one of the applications for IoT, but a good one because now farmers can free up time to do other important work on the farm or spend time with their families.”

If you have vision, passion and creativity, discover more about the Bachelor of Engineering (Honours), majoring in Electronic Systems and Internet of Things Engineering. 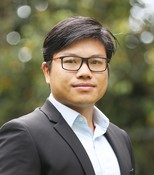