Multilingualism will be celebrated and advocated for on International Literacy Day. JCU Senior Lecturer Florence Boulard is shaking up language education in the Pacific to pave the way for an internationally minded future.

In an increasingly global world, multilingualism is a highly prized skill but only 6 per cent of Queensland students are finishing Year 12 having studied a second language. In 2014, Florence took a big step towards increasing the linguistic future for Queensland students by initiating the Young Language Ambassador (YLA) program. The YLA program has a direct focus on breaking down the barriers to language education.

“I wanted to break down as many barriers as possible,” Florence said. I wanted to engage with primary schools, high schools, and the University — I wanted all the different sectors to be involved. I didn’t want the fact that it was a state school, or private school, or independent school to be something that would cause a barrier, so everybody was welcome to come along.”

One unique difference of the JCU YLA program is that it moves away from the Eurocentric model of past language education and instead offers a distinctly Pacific perspective. Multilingualism — Florence points out — is something that is very common among many places that are a couple of hours away from Australia. “I think it’s very important for students to see that their language skills are something that they can use in multiple contexts and that this context doesn’t have to be all the way in Europe.”

Joining the University in 2012, Florence says that JCU’s tropical agenda empowered her to refocus language education, specifically her French classes, on the South Pacific. “I realised that JCU’s tropical agenda was very powerful. To me it was almost like a revelation, an opportunity to challenge the stereotypical idea that we have of the French language. As a result of that, I was able to transform my teaching practice to reflect that the Pacific islands have a lot of Francophone islands like New Caledonia, Vanuatu, Wallis and Futuna, and French Polynesia.”

Florence hopes that language education that is immersed in our geographical context will increase awareness and cultural understanding of our closest neighbours. “Whatever happens on those smaller islands there will be an impact on generations of Australians. It is impossible to care about something that we don’t know much about, and I think if young people in Australia don’t know much about those islands then why would they care about it. Why would they care that Tuvalu is disappearing?”

The desire to increase the international awareness of young people who will enter global workplaces that are culturally and linguistically diverse drives Florence’s passion for the YLA program. “The reason why I do what I do is because I would like to see communities becoming more internationally-minded. I think it’s about really empowering young people to see the value in language education, which is something we often take for granted.”

Start a global conversation with JCU Arts and Social Science 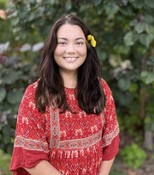