Mike Kingsford is a marine biologist who researches reef fish, but also jellyfish, which most of us would rather stay away from. Box jellyfish are really interesting creatures – they have 24 eyes but no brain, strong swimming abilities and they can avoid objects and control their position near land.

Box jellyfish like to stay close to ‘home’, with many staying in the same area for their whole lives, from larvae to polyp to grown-up jellyfish. “For example, at Magnetic Island, we know some bays are a higher risk, while some other bays are not,” Mike explains. This is important to know for those who like to go out for a swim, and also for the lifesavers who monitor the beaches, and who work together with the researchers in order to save lives.

World Oceans Day and the health of the planet

When it comes to World Oceans day, people don’t only talk about reef fish and jellyfish, but about the uncountable number of plant and animal species that populate our oceans, and that have such a great impact on our lives. “People forget that 70 per cent of the planet is actually ocean, not earth,” says Mike. Having a special day for the oceans “is incredibly important, it’s about the health of the planet. We need to have respect for that because the persistence of humans depends on a healthy ocean."

Oceans not only house a wealth of protein for people, but they are critical for absorbing greenhouse gases and for maintaining the health of planet Earth.  Further, they sustain remarkable biodiversity and beauty that should be enjoyed by all into the future. This is why it’s important to act. “We can all have a role, even if you consider it quite minor. There are 7.7 billion of us on the planet. A high percentage of those live close to coastlines, and the brutal truth is, we all have an impact.”

What we can do to help the oceans

Historically, caring for the reef was left to the governments. But we all have roles to play.  Climate change is altering oceans and the nature of environments in which marine organisms live.  Minimizing our use of fossil fuels and maximizing our use of alternative energy such as solar, wind driven and tidal power all helps to reduce global emissions. Fisheries are important worldwide, but consider how those fish are caught and whether practices are sustainable without destroying habitats and non-target species.

The nature of development matters.  For example, it is important to consider the consequences of building on shorelines or removing habitats such as mangroves. “We need to respect habitats, like mangroves, which people think are smelly and nasty but are actually important recruitment areas for fish, and they maintain our coastline,” Mike explains.

All of us can contribute to keep the oceans clean, “like respecting the ocean by not dumping water bottles and other plastic rubbish in there.  Because plastics can last in the system for a very long while and affect many levels of the food chain

People can help the ocean is by joining beach clean-ups, which is also a good way to meet like-minded people.  At the end of the day it is only through the view of ‘the masses’ that political change can place greater emphasis on the value of our oceans.

JCU is a world leader in marine biology. Find out more about studying Marine Biology and Aquaculture at JCU. 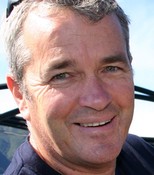