Not many people would be jumping out of their skin to spend every day with frogs, but JCU’s Dr Lee Berger is up to the challenge. She has dedicated more than 20 years to studying frogs and the cause of their decline — the deadly chytrid fungus. Lee and her colleagues are racing to find a solution before we lose some of the most unique animals in the world.

The Southern Corroboree Frog is no shrinking violet. With vibrant yellow markings etching their jet black skin, the frogs’ colours warn predators away from attacking the poisonous amphibian. However the Southern Corroboree Frog is under threat and will likely become extinct if scientists can’t find a solution to the deadly fungus that is causing massive declines in frog numbers.

The spread of the deadly chytrid fungus since the 1970s has caused frog declines and extinctions across the globe. In Australia, the Southern Corroboree Frog is one of the most endangered amphibians with less than a dozen left in the wild.

Dr Lee Berger and her colleagues at JCU’s One Health Research Group are working to find a solution to chytridiomycosis. Video: Jack Breedon and Harrison Warne

Dr Lee Berger is an expert on the decline of frogs and is determined to find a solution. In 1995, she started investigating the decline as part of her PhD at JCU. She was supervised by late Professor Rick Speare, who had been asked by Queensland National Parks to help determine why frogs were disappearing in North Queensland rainforests. Lee discovered the cause was chytridiomycosis — a fungus that grows on the superficial layers of a frog’s skin.

“I have kept at it, this research on chytridiomycosis in frogs, because we know that populations of six Australian species have been so reduced they will become extinct without a solution,” she said. “We have learnt so much about this disease, but still do not have a widely effective method for producing sustainable populations in the wild.”

Decades of mainly focusing on one disease has not dampened Lee’s enthusiasm for researching the subject. She said the constant challenges and diversity of her research motivates her to continue working towards a solution.

“The work is really interesting and challenging,” Lee said. “My research is actually very diverse. There are few labs working on this issue in Australia, so we have attempted to answer a broad range of questions.”

Studying the decline of frogs involves fascinating work, including seeing electron microscope images of frog skin with fungal tubes poking out to the surface.

The research has not been without its challenges. Chytrid fungus is an unusual pathogen and the first from Phylum Chytridiomycota to cause disease in vertebrates. When it was discovered, scientists had to develop new methods for culturing, diagnosing and doing infection experiments.

Sporangia of the chytrid fungus in culture.

“Initially, frogs were disappearing and no deaths were observed, making it impossible to work out the cause of declines,” Lee says. “Chief Ranger of Queensland Keith McDonald and Rick Speare started intensively monitoring an abundant population near Cooktown that they guessed would be hit next. Sure enough, they detected the decline and collected dead frogs that could be used for pathology.”

Back in the laboratory, Lee and her colleagues are focused on ensuring the survival of these magnificent creatures. Since the chytrid fungus is widespread and can’t be eradicated, they are focused on understanding immunity to the disease with the aim of selecting for resistant frogs.

“The biggest challenge has been to reverse its impact on wild frog populations,” Lee said. “Researchers around the world are now working towards a solution to improve frog survival rates. The other constant challenge, of course, is getting funding and trying to manage the uncertainty for the research group staff and students who are relying on short-term grants. We've come a long way in understanding this problem and it would be devastating to have to stop when we are getting closer to a solution.”

Dr Lee Berger with Dr Lee Skerratt, who leads the One Health Research Group at JCU.

Lee wants people to know that threats to Australian wildlife not only come in the form of invasive species, such as feral predators. She encouraged people to raise awareness of how frogs are at risk of becoming extinct without greater government interventions.

“Introduced infectious diseases of wildlife can be as dangerous as other invasive species, such as feral predators, and wreak havoc on native populations,” she said. “If we don't take these threats seriously, Australia will lose biodiversity and become more boring and less unique in the future.”

If you would like to help rescue frogs from the brink of extinction, you can make a donation to support Dr Lee Berger, her colleagues and this vital research. 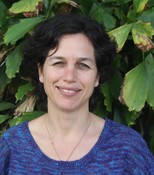 Dr Lee Berger
Lee is part of the One Health Research Group of senior and postdoctoral scientists and PhD students https://www.facebook.com/onehealthresearchgroup for more information.
Read profile