State and federal policy may not always align. Communication gaps are frustrating, but more importantly, what impact could this have on our threatened species?  How can we expect marine migratory species to understand where one political boundary ends and another starts?

Rachel Miller, a JCU PhD student, is determined to find a method to close the communication gaps between the Australian federal and state policies concerning the management of threatened marine migratory species. Her goal is to start these governments working together.

Born in Chicago, Illinois, Rachel is fixated with sea turtles. She moved to Florida to be closer to the ocean and complete her Masters degree at a university that focused on ocean and coastal regions. She was conducting sea turtle research in The Bahamas when told of ‘that turtle guy’ in Australia, which planted the seed of moving to Australia and doing her PhD. ‘That turtle guy’ is JCU’s Associate Professor Mark Hamann who specialises in turtle conservation. “I did my research and found that JCU has a huge presence in marine biology, this reinforced that I should come here,” she says.

Rachel working as a Research Assistant in The Bahamas. Image: supplied

From working as a research assistant for a sea turtle research program in The Bahamas, to identifying and analysing gaps in the federal and state policy, Rachel is passionate about solving the problem of this communication gap relating to managing migratory species. “I collected all federal and east coast state environmental policies,” she says. “This included the Queensland, New South Wales, Victoria, and Tasmanian policies and management plans. I chose to focus on four key species; sea turtles, dugongs, humpback whales, and migratory shorebirds. I then reviewed the policies using a framework I developed for my PhD.”

This long and tedious exercise was worth it. Rachel’s patience rewarded her with data that outlines a clear disconnect between environmental policies and management plans from the different government levels. Policy developed to protect migratory marine species in one state reflected no consultation with the adjacent state; the trend was that only policies within the state connected with each other.

Australia’s primary piece of environmental legislation, the Environmental Protection and Biodiversity Conservation Act 1999, is the central policy that links the various conservation policies between the states. “This connection emphasises the role of this Act and highlights the need to close communication gaps between governance levels,” says Rachel.

Shark nets are an example of the policy disconnect between states as management of these nets differ from state to state.

One of the major issues impacting on migratory species, such as turtles, dugongs, and humpback whales are shark nets,” she says. “If one of those species gets trapped in a shark net, this is detrimental to their species as they are long lived. One or two losses of these animals can significantly affect their population."

Once an animal leaves a state boundary and goes into another, we treat them differently. The effectiveness of these policies vary between states and there is no collaboration between the policy makers to measure the success of each management plan.

In addition, Rachel discovered that environmental policies favoured ‘charismatic megafauna’. “The policies were biased towards species that are considered by the public to be cute and cuddly, such as sea turtles and dugongs,” she says. “This is alarming as all four species I chose are considered to be Matters of National Environmental Significance in Australia. If the policies are biased towards certain species, the other species may not be appropriately protected against their threats.”

So, will the policy makers talk to each other?

Rachel plans to conduct interviews with stakeholders who are working on the management of marine migratory species. Stakeholders could include politicians, policy makers, researchers in non-government organisations, and key community members. She wants to know if there is a way to fill the gaps in the policy to promote the most effective conservation of these species.

“I now have clear data that outlines the gaps between these policies,” Rachel says. “The next step is determining how to work best with the key stakeholders involved in the management process.”

Rachel is aiming to promote a more collaborative decision-making process. By working with stakeholders and determining their perceived issues, she can then justifiably present solutions. Not only does she want to encourage communication between policy makers, but she also values the need for the public, including indigenous communities, to be involved in the implementation processes.

Communication and collaboration between key stakeholders can prevent threatened species from becoming endangered, which is exactly what sea turtles have been waiting for.

If you too have a keen interest in advocating for the protection of marine animals, check out JCU’s science degrees. 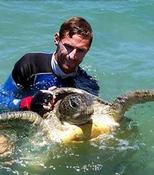