Roger Yeldham has worked at JCU for 50 years – since the university’s very beginning, starting out as a photography assistant. Now he’s sharing a snapshot of his experience of JCU’s history.

In 1970, Roger Yeldham was offered two positions of interest in Townsville. The first was as a news cameraman with North Queensland’s first television station. The second was as a photographic assistant at JCU. 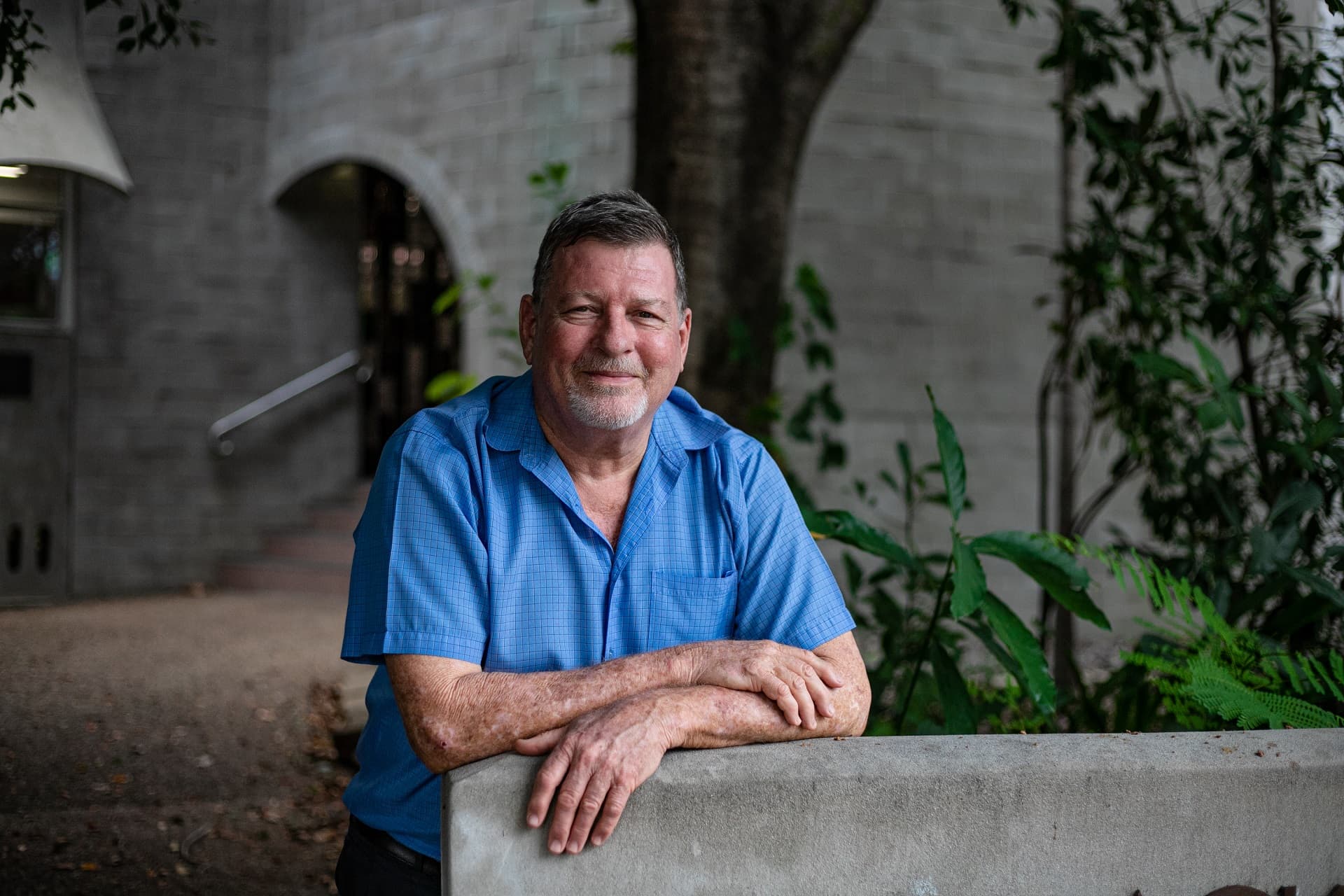 “I accepted the offer at JCU as I felt the position would offer different challenges and the scope to learn more, both formally and informally,” Roger says. Roger did indeed learn more as he chose to study part time; first completing a TAFE Diploma of Art followed by a Bachelor of Visual Arts from JCU, meaning that Roger was both studying at and employed by JCU at the beginning of its 50-year legacy.

Roger started working at JCU Pimlico campus in September of 1970, and soon became more and more involved with JCU events. “Little did I know then that my career would be so interwoven with graduation ceremonies, and that I would have a role to play, first as photographer and then as ceremonies officer at almost all ceremonies from that year on.” 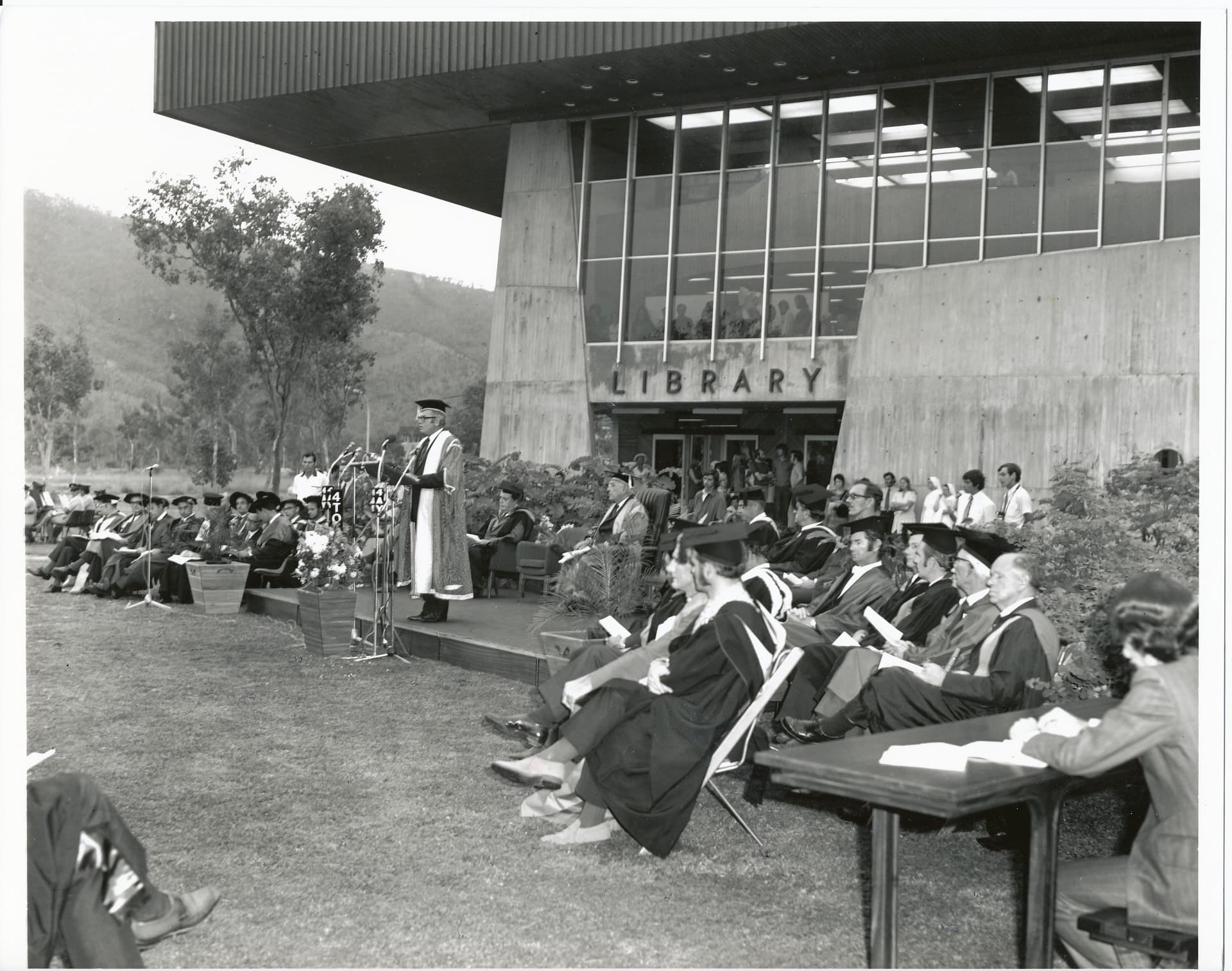 Outside of events, Roger was also immersed in the university’s photography section and spent much of his time in the darkrooms and studios in the Ken Back Chancellery building. One event in particular had Roger in the darkrooms quite frequently. On April 20 1970, Queen Elizabeth signed the James Cook University of North Queensland Bill and gave her Royal Assent. When Roger started in September of the same year, there was still a strong demand for prints of the signing ceremony. “There was no instant mass distribution of digital images in those days. If twenty orders were received, twenty prints had to be hand-printed, washed, dried, retouched, and then posted,” Roger says. “I ended up printing so many copies that I started to feel as though I had personally witnessed the event.” Aside from printing images of such a notable event, Roger helped to provide many services for the university, such as capturing images for promotion, internal publications, and external media. Another key role of the photography department was to provide photographic support for staff and students for their research and lectures. “There was a great demand from academic staff to produce thousands upon thousands of 35mm film projection lecture slides,” Roger says. “One notable student I remember working with is Emeritus Professor Helene Marsh, who at the time was undertaking research for her PhD.”

One role which Roger remembers fondly has its results still on display. Housed in various units across the university is an ever-increasing collection of artefacts and historical photographs, which over time were photographed for various research and exhibition projects. “I recently moved into building 4, and hanging in the corridor outside my office are prints that I or a colleague had printed many years before,” Roger says. “As I look at them, it’s not hard to take myself back in time and visualise printing them as though it were yesterday.”

The evolution of photography production has changed immensely in the last 50 years. However, Roger says it was a progressive change. “The introduction of digital technology did not instantly change the way professional photography was practiced. At the start, resolution of digital images was not high enough for commercial reproduction. However, improvements were constantly being introduced, to the point where digital completely took over from traditional practices and the computer replaced the dark room.”

But as technology has changed and adapted, Roger has adapted right along with it. Roger has had a long career at JCU, working on a wide variety of projects, from event photography to community engagement. “One rewarding project that I recall having the opportunity to coordinate was an exhibition created as a tribute to honour servicemen and women,” Roger says. The ‘Living Legends’ exhibition was JCU’s contribution to the August 2005 Townsville VP 60 celebrations and was curated by JCU staff using images from the JCU North Queensland Photograph Collection combined with portraits of veterans taken by JCU photography students. The ten display panels graphically illustrated different aspects of life in Townsville during the war years. The exhibition was on display in the Eddie Koiki Library as a part of the University Open Day displays on August 14, 2005. Looking back on a career that spans the length of the university’s lifetime, Roger is positive about what he has had the opportunity to be involved in and been able to accomplish through his work. “It has been a privilege to have been a member of the JCU staff and to have had the opportunity to contribute to the university over the past 50 years.”

If you are passionate about photography or visual art, consider what you can do in Design and Creative Arts with JCU Bachelor of Arts.

Found this interesting? Check out what else JCU is showcasing in honour of its 50th Anniversary.