Imagine a future where a small electronic device could identify every species that’s passed through your local area in recent days. Rare animals or dangerous pests, thriving species or those in collapse – all could be accounted for, based on the tiny fragments of skin, fur, or scales that these creatures shed on their way through.

There are two methods for identifying sources of eDNA:

“We might think they’re rare, but it could just be that we haven’t encountered them much, because they live underground or in a remote area. There are a whole lot of animals in Australia that we just don’t know much about, and eDNA is helping us understand their distribution.”

“We have a project underway where we’re looking at the sawfish, which is a very elusive freshwater-estuarine species,” says Professor Jerry.

JCU’s eDNA research is based at its environmental research group, TropWATER. Find out more about its latest projects. 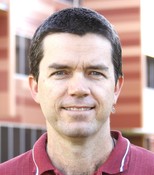 Prof Damien Burrows
Dr Burrows has been Director of TropWATER for five years. He specialises in freshwater, estuarine and coastal aquatic ecosystems and catchment management and has 22 years research experience in the tropics. Most of his professional life has been
Read profile