Have you ever looked at a parasitic worm and wondered exactly how much it could help you? No? Well, student Katherine Oakland says a conversation with James Cook University researcher Dr Michael Smout could change your mind about these bizarre little creatures that plague our planet.

During a trip to Cairns, through sheer serendipity, I met Dr Michael Smout, a JCU researcher who works with worms. He’s polite at first, collected, but when you ask him to tell you what he does, his story springs open with pure passion. He begins in Thailand, in native communities. In South East Asia, there is a huge problem with parasite-induced liver cancer. He explains how locals will eat the raw fish they catch in their villages as a staple of their diet. This is where Smout’s true interest comes in, these fish contain a parasite called Opisthorchis viverrini, the Thai liver fluke.

While intriguing, his focus wasn’t on the fact that 81 per cent of liver cancer cases in this region were caused by this fluke. No, it wasn’t even that the liver fluke caused cancer that tended to be diagnosed late and often kills patients within a year. It was that as the liver fluke munched around your liver, it healed your wounds as it went. That’s right, something that is classed as a Group 1 carcinogen by the World Health Organisation, secretes a growth factor in its spit that makes its way into your bile duct and not only helps you heal wounds, but even helps blood vessel growth.

Michael Smout spreads the word on worms in The Science Tent at Splendour in the Grass, Byron Bay.

Discussing this while drinking coffee and overlooking the water in Cairns, you get the feeling that Smout knows he’s sitting on a quiet breakthrough in medical science. He tells me about people with diabetes, how diabetics would make up the third biggest nation in the world if they were a country, and how many suffer chronic wounds, wounds that will never heal, because their bodies can’t cope with all that it takes to heal. He explains how this little worm, which causes cancer and lives in your liver, could be the salvation of those who have chronic wounds. He explains how at first they hadn’t even considered the wound healing potential of this growth factor because the team were working on a vaccine for the fluke.

Smout talks about Dr Paul Giacomin and Dr John Croese — fellow JCU researchers who found that infecting patients with Coeliac Disease, a condition that ravages your intestines when you consume gluten, with hookworms can completely change their life. Before being infected with hookworms, some Coeliac sufferers can’t eat any pasta without experiencing painful consequences. After infection and gradual reintroduction of gluten over six months, they can eat a small bowl of pasta with minimal discomfort.

Michael Smout calls on the help of Teddy and Larry the liver worm to help people discover the power of the small wriggly worms.

That’s where the Cairns worm team, led by JCU’s Professor Alex Loukas came up with the theme “Worms for Cures”. We’re so focused on curing the immediate threat that we forget how much we can learn from these weird little wriggly things. Smout has high hopes for the future, he hopes that this ‘supercharged’ healing could not just help diabetes sufferers, but soldiers who suffer horrendous wounds and even accident victims.

The future looks bright for JCU Tropical Medicine, and Smout reminds me as he closes his story that sometimes we overlook the small things, things that could help us the most.

To hear more about Dr Michael Smout's work, listen to 'The Return of the Worm in Medicine' podcast with Dr Karl Kruszelnicki. Discover more life-changing research at the Australian Institute of Tropical Health and Medicine. For more information about “Worms for Cures”, contact Michael at Michael.smout@jcu.edu.au. 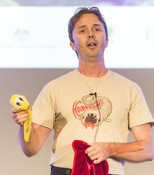 Dr Michael Smout
Dr Michael Smout obtained his BSc from the University of Queensland (UQ) in Brisbane, Australia and his PhD from UQ/Queensland Institute of Medical Research (QIMR).  His research interests have included melanoma, childhood viral infections and
Read profile