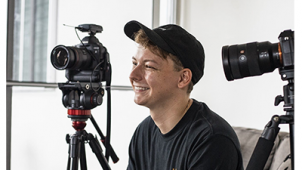 JCU Criminology Alumni, Constable Carla Duncan, has faced many difficult days in her career with the Australian Federal Police. But 1 July 2018 is a day that she'll never forget.

“As a police officer, every day you can have a difficult day,” Carla says. “Particularly if you’re going into a domestic violence job, or a car accident, or dealing with elderly abuse. There’s been several difficult days, but the worst for me was when I was attacked on the first of July, 2018.”

When Carla went with her Sergeant and an acting Sergeant to investigate a theft, the offender set his American Pitbull on them. The dog attack resulted in Carla being hospitalised for several days and receiving surgeries for the wounds on her arm and leg.

It also resulted in a difficult period for Carla and she was diagnosed with Post Traumatic Stress Disorder. Having to face the potential that she may never be a fully operational police officer again, she chose to grow stronger out of her place of pain.

With the help of her support networks such as her family and friends, as well as the Australian Federal Police, Carla overcame the unimaginable.