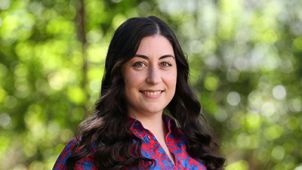 After 10 years as a business owner managing over 100 employees, JCU alumni Meredith Hutton decided to take on a new challenge. Meredith is now helping to shape the future of communities in northern Australia.

Becoming a town planner was not a path that Meredith considered when deciding on a career after high school. “I didn’t even know planning existed,” she says. Instead, then 20-year-old Meredith bought her business and embarked on a career in hospitality management.

A few years later, circumstance brought town planning into Meredith’s sights and she began considering a career change. “When I was exposed to planning, I thought that it looked interesting and that it might be something worth pursuing,” she says. “I decided to do my Master’s in it and ended up loving it!”

Town planners make decisions about the future development of urban, regional, and rural communities. Planners consider the overall needs of the community, and work to support the sustainability of cultural, natural, and built environments. Considered planning can improve the liveability and vibrancy of public spaces and effectively manage urban growth to help ensure a prosperous future.

Meredith is now in her dream job with Townsville firm Milford Planning. The thing she enjoys most is the variety that comes with working in regional planning. “We do work with local governments, we do strategic planning, we do development assessment,” she says. “There’s a really broad cross section because we’re doing work in so many geographical areas, so it makes it really, really interesting. There’s always a mixture of what you get, and you’re always exposed to different issues and outcomes. It keeps me on my toes.”

After finishing a degree and snagging a dream job most people are happy to have a break from intense learning. But Meredith isn’t most people. Her desire to keep learning is her main career goal. “I am just so keen to learn all of things I can,” she says. “I’m continually learning as much technical knowledge as I can. My goal is just to soak in as much planning knowledge as possible, especially about strategic and development assessment work.”

For Meredith the best part about planning is the impact it can have on local communities.