The discovery of a South African cave filled with the bones of a puzzling new human relative blew the scientific community away.

But work led by Australian researchers has now revealed another surprise: Homo naledi lived at the same time as our own ancestors.

In September 2013, two cavers exploring a deep and elaborate cave system 50 km northwest of Johannesburg in South Africa made a truly astounding find.

The dolomite cavern within the Rising Star cave system had not been easy to reach; Steven Tucker and Rick Hunter had crawled, squeezed, climbed, and eventually dropped their way into a hidden chamber more than a soccer field’s length deep into the network. The final hurdle was wriggling down a 12-metre chute, which is less than 18 cm wide at its narrowest points.

The inaccessibility of what would be named the Dinaledi Chamber made the find all the more surprising: huge numbers of fossilised bones from a previously unknown hominid.

These bones have revealed a species with an unexpected mix of ape-like and modern human features, which stood 1.5 metres (4.9 feet) tall, was a strong climber and upright walker, and which likely manipulated tools.

“The most surprising feature of the new species is its small brain capacity – it’s so much smaller than Homo sapiens’. Otherwise it might have looked quite similar,” says Dr Roberts.

“The differences lie in elements of the skeleton, such as the shoulder and pelvis, which suggest a more primitive member of the Homo genus.”

A new hominid in the neighbourhood

The discovery was revealed in National Geographic in October 2015, which described it as “the most astonishing human fossil discovery in half a century – and undoubtedly the most perplexing”.

The find was perplexing because it was not at all clear how the bones got into the caves, as none of the normal routes seemed to make any sense. The only bones at the site were hominid, and they had no bite- or scratch-marks, so couldn’t have been carried in by animals, and the movement of water at the site is such that it couldn’t have washed them into the chamber.

At the time of the discovery, the scientists concluded that the most plausible explanation was that the bodies were carried to the chamber by other individuals of the species they named Homo naledi, who dropped them down that final 12-metre chute intentionally, either to dispose of them, or as some kind of burial rite.

The suggestion was controversial within the palaeoanthropological and archaeological communities – that a strangely primitive human, with a relatively small brain, could be performing complex cultural or religious behaviours so long ago. It was hard to believe for some.

Further research to interpret the geological context of the fossils by Professor Dirks and Dr Roberts has since helped back up the controversial hypothesis and raised new and fascinating questions.

For example, says Dr Roberts, one objection raised was that the cave might have been a different shape historically, or perhaps there was another entrance, making it easier to get in – the hominids might therefore have just been camping or sheltering there.

“But I’ve spent dozens of hours in the chamber looking for other entries,” says the small-framed geologist, who is one of the few lucky enough to fit down the chute. “We’ve used ground-penetrating radar, magnetic surveys, and laser scanning. I don’t think we could be more confident that this was the only entry, and the cave hasn’t changed much.”

“It appears the potential for new finds is enormous. And it’s simply by taking a different approach and being a bit more systematic that all of this took off.”
Professor Dirks, JCU Associate Dean of Research

Professor Dirks was lead author of a paper published in May 2017, which revealed the age of the fossils for the first time. The primitive features of H. naledi had led to speculation that the species was 1 million or more years old, and therefore filled a gap in the scientific knowledge about the earliest species in the Homo genus.

But the ages revealed by six different dating methods—including electron-spin-resonance dating on teeth, and uranium-thorium dating of flowstones covering the fossils by Drs. Christa Placzek and Hannah Hilbert-Wolf at JCU—revealed a more intriguing conclusion. It appears that H. naledi was a relatively recent hominid, and had lived in the landscape at the same time as early members of our species.

The fact that H. naledi is 236,000 to 335,000 years old is “frankly astonishing,” says Professor Berger. “This species of primitive hominid was actually around at the same time as Homo sapiens.”

“That’s the first time one of the primitive hominids is found in association with modern humans in Africa." Professor Dirks, JCU Associate Dean of Research.

While our species co-existed alongside Neanderthals in Europe; Denisovans in Siberia and Asia; and the ‘hobbit’ species Homo floresiensis in Indonesia, Homo sapiens were until now thought to have been alone in Africa.

The discovery of H. naledi and its age tells us that human evolutionary history is “far more complicated than just a straight, sequential path, with Homo erectus going to Homo heidelbergensis, going to Neanderthals, going to Homo sapiens,” says Professor Dirks.

“We have had many different branches on the family tree, and it’s only recently that there’s one survivor, Homo sapiens, on the landscape. You go back in time, and clearly there have been many different species of hominids alive at the same time.”

Further announced in 2017 was the fact that a second chamber, also containing H. naledi fossils, had been found in the complex warren of caverns that make up the Rising Star cave system.

Inside this newly found Lesedi Chamber, scientists discovered bones of three individuals, including a large male who is “one of the most complete hominid skeletons ever discovered”, says Professor Berger. “The discovery of the second chamber adds weight to the idea that Homo naledi was deliberately disposing of its dead in these deep underground chambers.”

If that truly was the case, they were likely using fire to light their way, Professor Dirks says, so the focus now is to find evidence of that – as well as new fossils, both in Rising Star and other cave systems.

Part of the reason H. naledi, and another more primitive hominid, Australopithecus sediba, have been found in South Africa recently is that Professor Dirks has been spearheading an effort with Professor Berger to use a systematic geological approach to finding fossil-bearing caverns. This involves mapping the geology of cave systems, and even using Google Earth to search for relevant sites.

“It appears the potential for new finds is enormous,” Professor Dirks says. “And it’s simply by taking a different approach and being a bit more systematic that all of this took off.”

The scientists have engaged cavers, like Tucker and Hunter, and have so far mapped out 75 new systems with fossils, up to five of which are now known to contain hominids, he says. 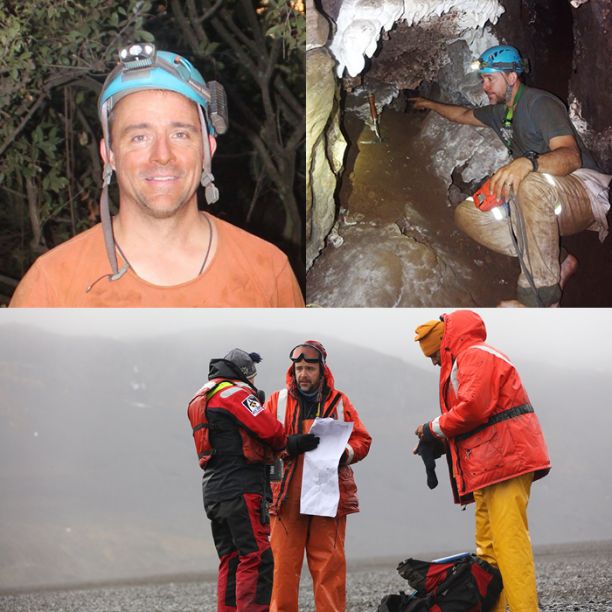 Eric’s research focuses on reconstructing the past to advance understandings of evolution, extinctions and environmental change, and resources. Eric’s work in geology and palaeontology is driven by discovery. His research investigates new fossils, from human ancestors to the discovery of dinosaurs in Antarctica and diamonds in Angola.

Eric’s research provides the geological context to understand how important fossils relate to ancient environments, extinction events, climate, and time, as well as having implications for understanding the location and origin of natural resources. Eric is passionate about introducing his students to research, particularly in the context of exploration and discovery-based science, and counts sharing exciting field experiences with his students as the most rewarding aspect of his work.