Lorna saw a need for JCU staff and students to have access to electronic waste recycling services due to the high environmental cost of sending e-waste to landfill and the lack of options for people to recycle their personal electronic waste. As a member of the JCU Sustainability Action Group, Lorna took it upon herself to organise an e-waste recycling week at JCU for staff and students to bring in their personal items for recycling. Over half a tonne of equipment was recycled through Endeavour Foundation – a not-for-profit organisation that employs 55 disabled people in Townsville to carry out the e-waste recycling program.

In late 2013 Johanna applied for an Action for Sustainability grant to establish an arboretum on the Cairns campus. Johanna acted as manager for the project, liaising with the Tropical Indigenous Ethnobotany Centre, the Australian Tropical Herbarium, local Indigenous clans, the Sustainability Office and the Estate Office to ensure the educational walks were constructed on time and to a high standard.

The arboretum opened in April 2014, with signs installed along two trails providing cultural and botanical information on 31 native species. The signage is expected to last 10+ years, and will increase student and staff awareness of local vegetation throughout this time. It is hoped students will gain a greater appreciation for the beautiful native plants present on the campus. This project was made possible by Johanna’s hard work and commitment.

This Space is the first Indigenous knowledge Space ever designed and built on an Australian university campus.

The Space enables all staff and students to learn about the sustainable educational practices Aboriginal people and Torres Strait Islander people have used to thrive and survive for 60,000 years.

The development of the building engaged social and cultural sustainability practices by working with the traditional owners of the Townsville campus and the wider Indigenous community. This process involved working with Indig Designs in Cairns, an Indigenous Design Company. The community partnership is essential in order to develop and determine how it will be used to maintain and share cultural knowledges.

Yarning circles and a Kup Muri (earth oven) fire pit are important components of the Space to transfer knowledge and understanding to all JCU staff and students. These features are enhanced by the involvement of Traditional Owners and other elders who share stories and knowledge with students using campus tours. These tours allow students, staff and visitors to investigate sustainable practices relating to food, medicine and relationships. Participants learn how Aboriginal people developed sustainable relationships between plants, animals and the seasons in order to maintain ecological, economical and spiritual links to country.

The Eradicate Insect-borne Diseases with Sunlight Initiative (EIDSI) at JCU is utilizing Queensland’s two major natural resources, sunlight and biomass. Insect bites from mosquitos or sand-flies are widespread in tropical North-Queensland and can cause allergic reactions or diseases such as dengue, Ross-river fever or even malaria. These symptoms inflict significant social and economic costs on our community. The research of the EIDSI helps to safeguard public health and covers prophylaxis, treatment as well as cure.

Using a local essential oil, water, solar heat and catalytic amounts of a household acid, the EIDSI team has produced a repellent as potent as DEET that maintains a pleasant odour without the nasty side effects. In an extension of this process, the team was able to convert a minor component of the oil simultaneously into a rose fragrance using solar light. The residual constituents are known antibiotics. The final product thus comprises of a repellent with floral odour and antibacterial properties.

For the treatment of insect bites, the EIDSI team has produced an anaesthetic with the activity of lignocaine.

The synthesis of antimalarials has likewise been achieved under mild conditions using sunlight. The team has constructed an effective air-bubble/liquid-flow reactor that allows for on-site and on-demand production. This research-stream was recently expanded to the frontline antimalarial artemisinin.

The EIDSI team is led by A/Prof Michael Oelgemoeller and managed by Matthew Bolte and has raised significant public interest as evident from a number of invited publications.

Alpha Phi Omega (APO) International Fraternity and Sorority officially opened the Eta chapter here at JCU in semester 2, 2013.  The official launch was celebrated with the unveiling of a plaque and planted frangipani tree for the Code Green Week (CGW) 2013 initiative.

For CGW 2014, APO ran activities such as environmental placard painting, rubbish pickups, serving breakfast to university cyclists, assisting in running of reef rallies and a dive to the reef in conjunction with ActNOW, SANTE, BUGS & others.

The APO membership base, predominantly medical students last year, has since expanded dramatically this semester to encompass nursing, veterinary, OT and marine biology. Guided by Leadership, Friendship and Service, APO involves JCU students in their local community through volunteering to help fulfil various community needs. APO have regularly assisted in teaching English to Townsville's refugees (both adult and children) in partnership with TMSG and Aitkenvale state school.

Their innovations and projects have had significant environmental and social benefits. They are responsible for a large increase in the number of children involved in classroom gardening projects.

There is increased engagement in the learning process, as well as heightened awareness of the role of sustainable practices in the modern world, and their place within that, locally and globally.

Aboriginals and Torres Strait Islanders in Marine Science (ATSIMS) is an exciting new program designed to help fill the gap between the potential of Indigenous Australians and the career opportunities available in marine science and management. By providing engaging, field-based science programming to predominantly Indigenous high school students, ATSIMS aims to bolster the interest, experience, and hands-on skills students need to initiate and succeed in marine science careers. Over the past two year, ATSIMS has worked with nearly 100 students from schools spanning a 200km stretch of the North Queensland coast.

Under the guidance of marine researchers and Indigenous leaders, ATSIMS Scholars engage in interactive in-class workshops and come face-to-face with fish and coral during a weekend-long field expedition to Orpheus Island Research Station. Scholars also tour the Australian Institute of Marine Science’s $35 million National Sea Simulator and experience life as an undergraduate student at James Cook University. Throughout the program, ATSIMS Scholars work closely with Traditional Owners who possess deep ecological knowledge acquired over countless generations of habitation on the doorstep of the Great Barrier Reef.

Dr Maxine Newlands came to JCU from East London University in 2013. Maxine’s research greatly contributes to promote and sustain the systems and process that informs and facilitates our engagement with the Great Barrier Reef.

Through her academic research and journalistic practice Maxine acts as a bridge between environmental and science researchers and the general population. She has given a voice to those working on and around the Great Barrier Reef and unpacks the historical and media strategies that have shaped our knowledge of the GBR. She is also currently working with researchers at CSIRO on, how media and governance shapes our understanding of the GBR.

Maxine has also recently been interviewed for ABC Radio National program Bush Telegraph, and joined the executive board of the North Queensland Conservation Council (NQCC).

All of these factors contribute and filter into Maxine’s teaching and research. She hopes to replicate the successful MSc Global Environmental Politics she ran in the UK, with an Australian focus here, at JCU, through a new environmental journalism subject at JCU.

This subject has been proposed to line management and welcomed as a great teaching and learning contribution. This subject will only run in 2016, but Maxine is currently working on a collaborative project to explore issues of environmental reporting with JCU and Samoan journalism students.

Max is a third year PhD student, the current president of the local permaculture group and a student representative for the JCU Sustainability Action Group. Max has worked to build meaningful relationships within the community and promote values of sustainability through learning and teaching in various ways including: 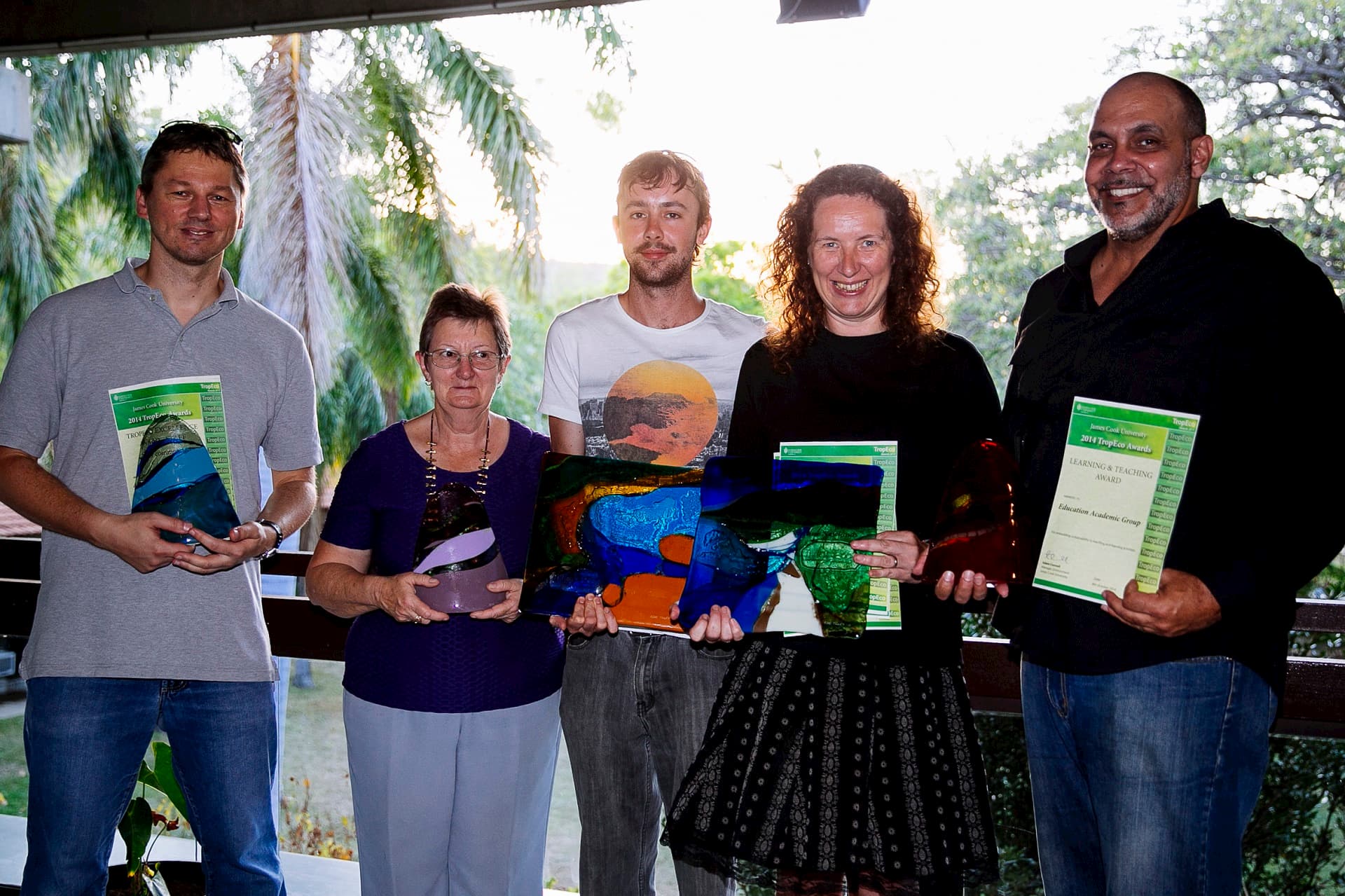