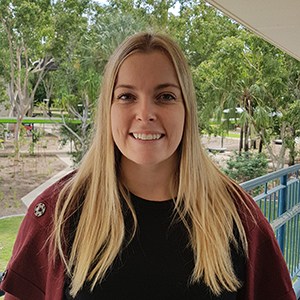 Madalyn Cooper is a PhD candidate in the Fishing & Fisheries Research Centre her research interest is motivated by conservation genetics of endangered species.

Madalyn graduated from The University of Sydney in 2015 with a Bachelor of Animal and Veterinary Bioscience (Hons I & University Medal). Her background in wildlife and conservation genetics, and interest in elasmobranchs, saw her move to South Africa to work at the South African Shark Conservancy in 2016 before returning to Australia to commence her PhD.

Madalyn’s PhD project utilises environmental DNA to resolve the global occurrence and distribution of Endangered and Critically Endangered sawfishes. Her work will contribute to our understanding of sawfishes and how best to conserve and manage their populations.