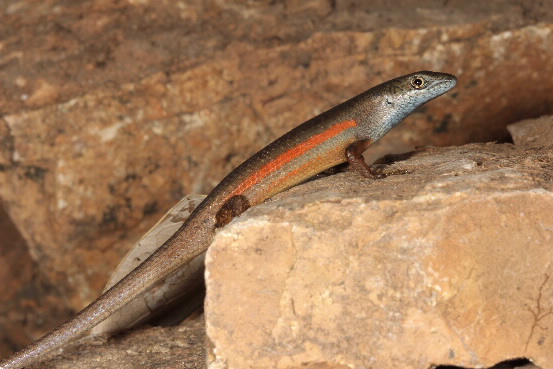 Dr Hoskin said the new lizards were described and given scientific names in a recent paper published in the international journal Zootaxa.

“Both species are small skinks belonging to the genus Carlia, a diverse group of skinks in tropical Australia,” Dr Hoskin said.

“The species names are in reference to the bright colours sported by breeding males of each species; ‘decora’ means ‘beautiful’ in Latin, with males of that species marked with vivid orange and blue, while ‘rubigo’ translates to ‘rust’, referring to the rusty orange colour of males of that species.”

Dr Hoskin said the Elegant Rainbow Skink was found in forests in the Townsville and Mackay areas.

“It is one of the most common skinks in Townsville gardens and would be familiar to many Townsville residents as the small skink that scurries away into the garden bed,” he said.

“This species had previously been recognized as a subspecies of another skink species, but our research found that it was sufficiently different from all other populations that it should be elevated from subspecies to full species status.

The Whitsunday Rainbow Skink is only found on Whitsunday, Hook, Hayman and Lindeman Islands. The species name ‘inconnexa’ means ‘unjoined’, in reference to the isolation of this skink on islands.

The study looked in detail at morphology, colour pattern and genetics of all populations thought to be this species and found that in reality Carlia pectoralis actually consisted of four species that are genetically distinct and can be identified based on morphology and colour pattern.

“It just goes to show that we still haven’t discovered all the diversity that’s out there, even in a fairly well known group like lizards in a fairly well studied area like eastern Australia,” he said.

“More and more we are finding that species we thought were widespread in eastern and tropical Australia are in fact composed of multiple species that have been overlooked because they look approximately similar.

“It’s only when we look in detail that we find that there are very interesting new species hidden in there.”

Dr Hoskin said while scientists had always known that these skinks existed, they had been calling several species by one name.

“In the case of these skinks, one of them isn’t even the closest relative of the others, it just happens to have scale characteristics that meant it was incorrectly lumped in with Carlia pectoralis when the original taxonomy was done.

“It is exciting that in this day and age we can realise that the most common skink in Townsville gardens is in fact a new species that needed a scientific name.

“When we don’t even have the taxonomy of common backyard creatures sorted out, it shows just how much undescribed diversity is still out there to be discovered.”