Only 7% of the Great Barrier Reef has avoided coral bleaching 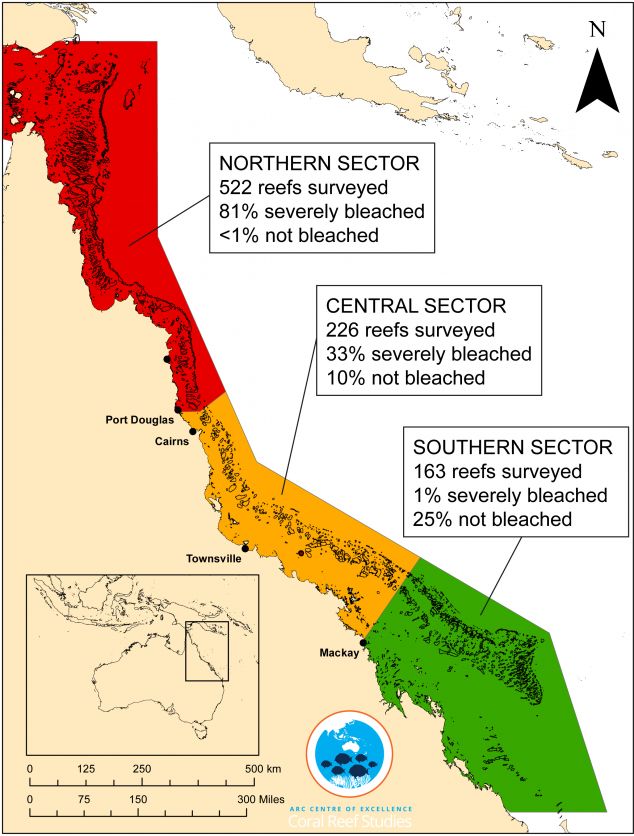 Australian scientists have revealed today the full extent of the coral bleaching that is unfolding on the Great Barrier Reef, off the coast of Queensland.

The final results of extensive aerial and underwater surveys reveal that 93% of the reef has been affected. It’s a mixed picture of very severe, moderate and little damage that changes dramatically from north to south along the 2300km length of the Reef.

Meanwhile on the west coast of Australia, researchers are also discovering large-scale bleaching caused by elevated temperatures on both sides of the Australian continent.

“We’ve never seen anything like this scale of bleaching before. In the northern Great Barrier Reef, it’s like 10 cyclones have come ashore all at once,” says Professor Terry Hughes, convenor of the National Coral Bleaching Taskforce that is documenting and studying the event. “Towards the southern end, most of the reefs have minor to moderate bleaching and should soon recover.”

“We have now flown over 911 individual reefs in a helicopter and light plane, to map out the extent and severity of bleaching along the full 2300km length of the Great Barrier Reef. Of all the reefs we surveyed, only 7% (68 reefs) have escaped bleaching entirely. At the other end of the spectrum, between 60 and 100% of corals are severely bleached on 316 reefs, nearly all in the northern half of the Reef.”

Underwater, teams of scientific divers have confirmed the accuracy of the aerial surveys, and are continuing to measure the ongoing impact of the bleaching.

“The bleaching is extreme in the 1000km region north of Port Douglas all the way up to the northern Torres Strait between Australia and Papua New Guinea,” says Prof. Andrew Baird from the ARC Centre of Excellence for Coral Reef Studies, who has spent the past 17 days at sea.

“Tragically, this is the most remote part of the Reef, and its remoteness has protected it from most human pressures: but not climate change. North of Port Douglas, we’re already measuring an average of close to 50% mortality of bleached corals. At some reefs, the final death toll is likely to exceed 90%. When bleaching is this severe it affects almost all coral species, including old, slow-growing corals that once lost will take decades or longer to return.”

More modest bleaching is now reaching its peak in a 600km central band of the Great Barrier Reef, between Cairns and Mackay. According to the scientists, reefs further south have escaped damaging levels of bleaching because water temperatures there were closer to the normal summer conditions over recent months.

“The severity of bleaching in the central section is less, and closer to the intensity of the first two mass bleaching events on the Barrier Reef, in 1998 and 2002,” says Prof. Hughes. “Thankfully, many of the corals there are more moderately bleached, so we expect that most of them will survive and regain their normal colour as temperatures drop over the coming months.”

The scientists have found that the huge footprints of the three mass bleaching events in 2016, 2002 and 1998 are different. “In each case, the location of the most severe bleaching coincides with where the hottest water sits for the longest period,” says Prof. Hughes.

“This time, the southern third of the Great Barrier Reef was fortunately cooled down late in summer by a period of cloudy weather caused by ex-cyclone Winston, after it passed over Fiji and came to us as a rain depression. The 2016 footprint could have been much worse.”

Australia’s tourism industry has a longstanding commitment to protecting its most valuable natural asset, the Great Barrier Reef. Reef tourism generates an annual income of $5 billion, and employs nearly 70,000 people. The Australian government has long recognised that climate change is the biggest threat to the Reef and the people who depend on it for their livelihood.

“Thankfully, many parts of the reef are still in excellent shape, but we can’t just ignore coral bleaching and hope for a swift recovery. Short-term development policies have to be weighed up against long-term environmental damage, including impacts on the reef from climate change,” says Daniel Gschwind, Chief Executive of the Queensland Tourism Industry Council.

On the west coast of Australia, researchers from the national taskforce are now also documenting extensive bleaching on the coastline and on offshore atolls.

“The coastal area that I study north of Broome has huge tides, and we thought the corals there are tough “super corals” because they can normally cope with big swings in temperature,” says Dr. Verena Schoepf from the University of Western Australia. “So, we’re shocked to see up to 80% of them now turning snow-white. Even the tougher species are badly affected”.

Mass Coral bleaching occurs when heightened sea temperatures due to global warming cause corals to expel tiny photosynthetic algae, called ‘zooxanthellae’. The loss of these colourful algae causes the corals to turn translucent and white, and ‘bleach’. Mildly bleached corals can recover if the temperature drops and zooxanthellae are able to recolonise them, otherwise the coral may die.

The National Coral Bleaching Taskforce was established in November 2015 to co-ordinate research effort among Australia’s marine science community in the event of a mass bleaching event. The taskforce draws together 10 research institutions across Australia to co-ordinate the efforts of over 300 scientists. The associated research institutions are, ARC Centre of Centre of Excellence for Coral Reef Studies, Australian Institute of Marine Science, CSIRO, Great Barrier Reef Marine Park Authority, James Cook University, NOAA, University of Queensland, University of Sydney, University of Western Australia, WA Department of Parks and Wildlife.