Mix of marine zones matters most for prey fish 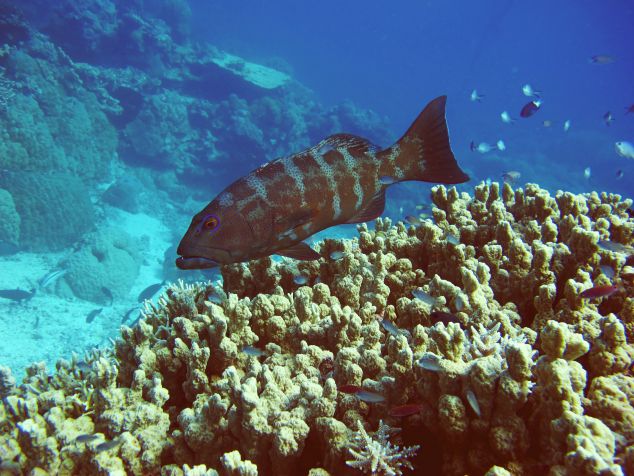 In a first-of-its-kind study, James Cook University scientists have discovered a mosaic mix of marine zones could benefit populations of prey fishes.

The research, conducted by JCU’s Dr April Hall and Professor Michael Kingsford, looked at whether fishing of predators on the Great Barrier Reef had effects on the reproductive dynamics of their prey.

Dr Hall said it was the first study to demonstrate that the depletion of predators can cause cascading ecological effects, and impact prey species at a biological level.

The scientists collected a prey species - the bridled monocle bream - from two management zones in the Palm Island group: marine reserves, which are protected from fishing, and open zones, which are heavily fished.

Predators such as coral trout, snapper, and emperor fish are popular fishing targets on the Great Barrier Reef, and play a vital role in coral reef food webs.

“We predicted that in marine reserves, where predators were abundant, prey would allocate more energy to predator avoidance compared to fished zones with fewer predators, and that this would affect their growth and reproduction,” said Dr Hall.

The team found that in the predator-rich marine reserves, the bream had reduced growth, poorer body condition, and a reduced capacity to reproduce compared to fished areas.

Dr Hall said that the study emphasises the importance of long-term protection of predators in marine reserves.

“It’s important to recognise that this pattern of predators influencing prey is a natural process, and marine reserves are the best way to ensure that this process continues.”

Professor Kingsford says the research has potential implications for understanding the connectivity of fish populations across management zones. “One of the things we now understand is that the reproductive effort of prey fish outside protected areas can flow back into reserves. This suggests that a mixture of zones is important for the health of fish populations.”

Dr Hall said it’s likely that the patchy mosaic design of fished zones and marine reserves around the Palm Islands enables this process. “This is significant, and provides support for the multi-zone system of the Great Barrier Reef Marine Park,” she said.