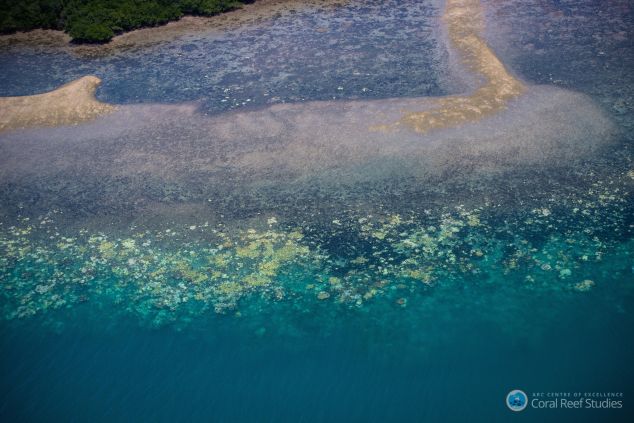 Aerial surveys of more than 500 coral reefs from Cairns to Papua New Guinea reveal that the most pristine section of the Great Barrier Reef is currently experiencing the worst, mass bleaching event in its history, with the overwhelming majority of reefs being ranked in the most severe bleaching category.

“This has been the saddest research trip of my life,” says Prof. Terry Hughes, convenor of the National Coral Bleaching Taskforce. “Almost without exception, every reef we flew across showed consistently high levels of bleaching, from the reef slope right up onto the top of the reef. We flew for 4000km in the most pristine parts of the Great Barrier Reef and saw only four reefs that had no bleaching. The severity is much greater than in earlier bleaching events in 2002 or 1998.”

“Even more concerning, we haven’t yet found the southern limit of the bleaching,” explains Prof. Hughes. “We’ll be conducting further aerial surveys this week in the central Great Barrier Reef to identify where it stops. Thankfully, the southern Reef has dodged a bullet due to cloudy weather that cooled the water temperatures down.”

Multiple research vessels and island research stations are also documenting the coral bleaching, with in-water research confirming what is clearly seen from the air, that the majority of reefs north of Cairns are undergoing bleaching and that virtually all species of corals are being affected.

“We could see extensive bleaching even among the most robust ‘massive’ corals,” says James Kerry, Project Manager of the National Coral Bleaching Taskforce, who also participated in the aerial surveys. “The fact that these hardy species have also turned white shows just how severe summer conditions have become on the northern GBR.

“Residents we spoke to in Cape York were shocked by what they are seeing, telling us that they had never experienced anything like this before.”

“Scientists in the water are already reporting up to 50% mortality of bleached corals,” says Prof. Hughes, “but it’s still too early to tell just what the overall outcome will be. We will continue to conduct underwater surveys along the Great Barrier Reef in the coming months as the full impact of this mass bleaching event unfolds.”

Coral bleaching occurs when abnormal environmental conditions, like heightened sea temperatures cause corals to expel tiny photosynthetic algae, called ‘zooxanthellae’. The loss of these colourful algae causes the corals to turn white, and ‘bleach’. Bleached corals can recover if the temperature drops and zooxanthellae are able to recolonise them, otherwise the coral may die.

The National Coral Bleaching Taskforce is designed to co-ordinate the research effort among Australia’s marine science community in the event of a mass bleaching event in Australia. The taskforce draws together 10 research institutions across Australia to co-ordinate the efforts of over 300 scientists.