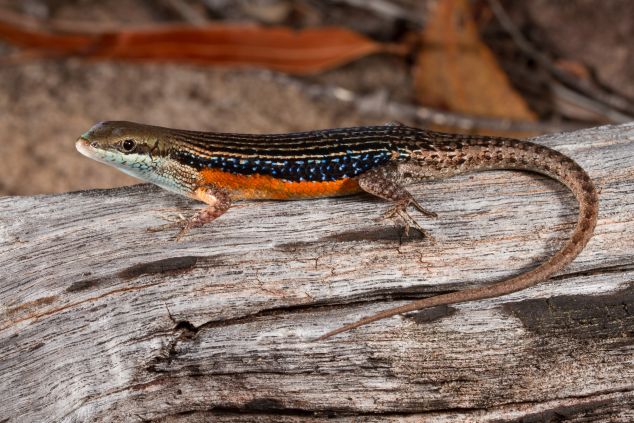 Why did the lizard cross the forest floor? It’s an ecological conundrum that James Cook University researchers Mat Vickers and Professor Lin Schwarzkopf have answered with a novel approach.

Their problem was that scientists didn’t know why lizards do what they do. If a lizard moves to a sunny spot, its body will heat up – but is it actually trying to warm up? Maybe it was chasing some tasty morsel of food and had to cross a sunny area to get it? How do you know that what an animal is doing is a deliberate strategy?

Lizards usually use the sun and shade to regulate their body temperature, a process known as thermoregulation. But taking a lizard’s temperature is a tricky thing, and comparing that to temperatures across their habitat can be even trickier.

Dr Vickers said the original methodology was a bit grim “Scientists used to shoot the lizards with a shotgun and compare the temperature of the meat with the air. If the temperature was different – Voila! Thermoregulation!”

Luckily for the lizards, and the scientists, the field has changed somewhat.

Dr Vickers and Professor Schwarzkopf devised a new computerised method that reconstructs the real temperatures across a habitat and plots random lizard walks through it. If real lizards achieve body temperatures different from that achieved by the random walking model, then they are walking non-randomly (deliberately) with respect to temperature.

The model produced some interesting results and confirmed lizards are deliberately trying to manage their body temperatures. “All our random walking model lizards died of heat shock at about 11 am.” Professor Schwarzkopf said. “This was the first indication we had that lizards are often working hard to achieve preferred body temperatures.”

The study also suggested that real lizards use a clever mix of carefully selecting habitats with certain temperatures (thermoregulating) when habitat temperatures are very warm or cold, while using the habitat much like the random walking model lizard the rest of the time.

Working out how much of a lizard’s behaviour is related to controlling its body temperature has been a goal of scientists for a long time. It’s even more important now as climate change alters the temperatures in lizard habitats.

The study shows exactly why, when, and where lizards choose specific parts of their environment to either heat up or cool down. The new methodology also shows which parts of the environment, and which times of day, are too hot for the lizards.

This has important implications for how lizards and other cold-blooded animals might have to change their behaviour under future climate change scenarios.

Note: All pictures are for single use only with this media release and with credit as captioned.