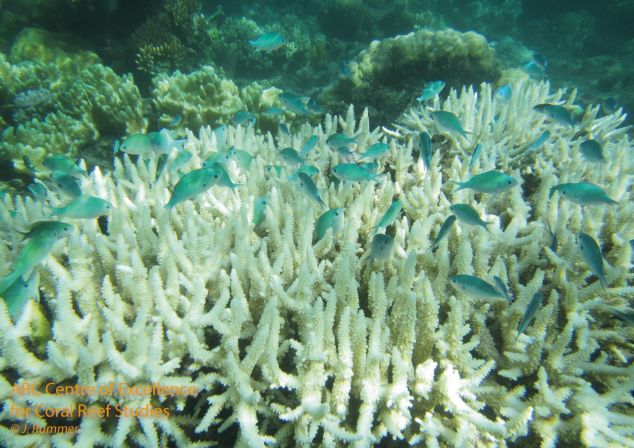 Senior Research Fellow, Dr Jodie Rummer from the ARC Centre of Excellence for Coral Reef Studies has just returned from more than a month at Lizard Island Research Station in the Northern Great Barrier Reef, and she is appalled by the extent of the bleaching.

“I witnessed a sight underwater that no marine biologist, and no person with a love and appreciation for the natural world for that matter, wants to see,” she said.

Dr Rummer has been undertaking research on the island since January 2012, one of the most pristine sites in the entire Great Barrier Reef. She has spent the past five weeks underwater, studying the effects of the extreme heat on the physiology of reef fishes.

“The bleaching now is not just restricted to the hard corals. There’s also extensive bleaching in the soft corals, and it is also affecting anemones and giant clams.”

Dr Rummer called the event “catastrophic”. She said fish were still abundant but is worried for the future.

“We know that many of these tropical populations of reef fishes cannot tolerate dramatic increases in temperatures for extended periods of time. So it may be just a matter of time before the fish start feeling the heat as well. We’re watching them closely.” The latest Bureau of Meteorology forecasts suggest that temperatures will remain well above average through the month of March.

Dr Rummer said the heat comes hard on the heels of cyclones that had also had an impact on the northern Reef.

“This year, the combination of El Niño, climate change, and an extended period of hot summer days when the tide was exceptionally low has caused many of the corals that survived last year’s cyclone to lose their symbiotic algae and start bleaching.”

She said aerial surveys planned in the coming days by the National Coral Bleaching Taskforce will systematically measure the extent of the phenomenon.

The National Coral Bleaching Taskforce was convened in 2015 to co-ordinate research effort among Australia’s marine science community in the event of a mass bleaching event in Australia. The taskforce draws together 10 research institutions across Australia to co-ordinate the efforts of over 300 scientists.

Link to video and pic: bit.ly/1VhRYjp

For single use only with this release and including watermark. Pic and video – Jodie Rummer