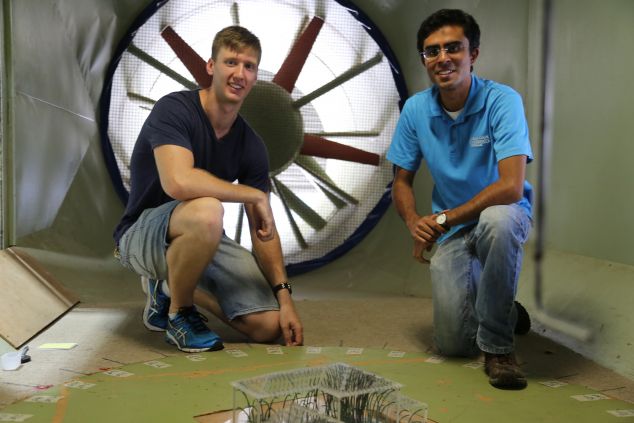 New homes are increasingly being built with unusual roof shapes, and new research by James Cook University reveals the potential for some new designs to lose roof cladding if houses aren’t well maintained or have minor construction defects.

A team of researchers looked at how the aerodynamics of the new roofs compared to the Australian wind loading standards – the code that engineers and builders use when designing houses.

“Houses used to be square boxes, with standard shape roofs, but in recent times custom shapes have become common. With the new shapes we see wind force acting in new ways on roofs and we wanted to see if the wind loading standards still applied,” he said.

The team built scale models of houses with typical new roof shapes and tested them in the wind tunnel at JCU’s Cyclone Testing Station.

“We built 1/50 scale models and fitted them with pressure sensors, then we tested wind loading for roof cladding, wall cladding and truss hold-down,” said Mr Parackal.

The technique allowed comparisons to the Australian standards for any wind speed for a house in suburban terrain.

“The current building standards can underestimate suction pressures on roof edges of houses with complex roof shapes, and more so for two storey houses,” he said.

Mr Parackal said this meant the potential was there for some houses to lose roof cladding and be opened up to water and further wind damage if houses are not well maintained or minor construction defects are present.

For both types of houses, the researchers found that many different wind directions generated high forces on the connections that hold the roof to the house frame.

Mr Parackal said when designers were considering these forces they typically took into account only one ‘worst case’ wind direction, but the research showed there were in fact many equally bad scenarios for a complex roof shape in high winds.

He said the design standards are not dangerously deficient, and as they must address a large range of building sizes, roof pitches and shapes, they are not expected to cover every eventuality.

But the research had taught one important message, borne out by the team’s examination of damage in the wake of a recent cyclone.

“We saw a relatively new shed that had lost its cladding, simply because the builder had used a screw that was only slightly the wrong size.

Our wind tunnel research has shown the margins for error are not as great as many people think and underlines the need for builders and apprentices to be aware that very small defects in construction can get you in very big trouble.”

The researchers said the margins of safety in building codes are there because of uncertainty about the performance of materials and the loads that the building would experience through its life and do not take into account defects or construction errors.