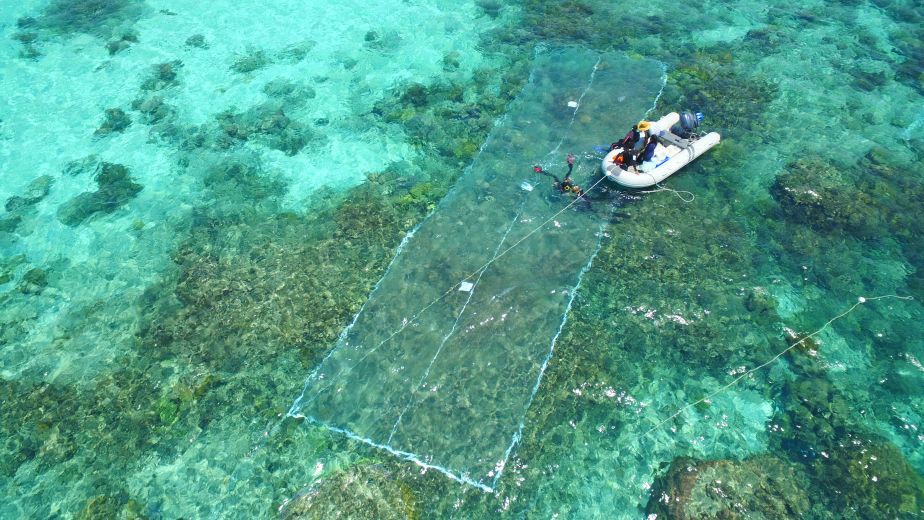 Last week’s deployment of the largest collaborative effort to regenerate a reef using millions of coral spawn has yielded promising results, which were announced today.

It’s the first time ever that the entire process of spawn capturing, larval rearing and resettlement has been tested on the Great Barrier Reef.

“One of the successful innovations from this project was the mass capture of eggs and sperm directly on the Reef while corals were spawning,” Professor Harrison said.

This successful trial is a critical step forward in moving from small scale, lab-based rearing to large scale, floating enclosures on the Reef. It is hoped that these findings can be scaled globally to reefs around the world under pressure from climate change and other threats.

To settle the coral larvae the team placed large mesh sheets resembling wedding veils on to the degraded sections of reef. Concentrated larvae were then added into the mesh covering and sealed, allowing the larvae a greater chance of finding a suitable place to settle.

With their parents having survived the mass bleaching, it’s predicted the larvae resettled back on to the Reef will also grow into thermally tolerant corals, and so better able to survive future bleaching events.

This project is a collaboration between researchers and the Great Barrier Reef Marine Park Authority, Queensland Parks & Wildlife Service, as well as other key industry partners. Aroona Boat Charters, Argo Expeditions and Biopixel have donated key vessel and crew support to assist with capturing, rearing and settling the coral larvae safely on to the reef.

The successful partnership between world-leading research, tourism and other reef-based industries brought together over 50 people, partnerships Katie Chartrand says are key to any future restoration efforts.

“We couldn’t have achieved what we have without the huge collaborative efforts of the entire team. It’s been a lot of long days and late nights, but to see the measurable effect yesterday of coral babies on the settlement tiles was so exciting,” Ms Chartrand said.

The team faced extremely challenging conditions with a record-breaking heatwave, strong winds and a looming cyclone forcing them to adapt quickly to the changing environment.

“We encountered difficult conditions on the reef, but field work is all about adapting to these conditions and we were lucky to have the support of a brilliant team to make this project successful.” Professor Harrison said.

Key innovations were also successfully tested in the lab, with results showing that coral larvae from at least two key species can be infected with a highly thermally tolerant symbiotic algae. Ensuring corals maintain symbiosis with these heat tolerant algae is important for future survival as reefs continue to warm under climate change.

“We’re buzzing with these findings,” Professor Suggett said. “The work opens the door to culture these algal symbionts at scale for mass inoculation of larvae to potentially aid reef resilience to future stress.”

●      From here, they were transported to the ‘nursery’ - large larval rearing pools where they matured over 5 days ready for settlement

●      Larvae were also reared on land in the lab, where new technologies to enhance larval survivorship and algal symbiont uptake were trialled

●      Monitoring will continue over the next 6-9 months and beyond, with the goal of showing a successful boost in coral abundance at degraded patches of Vlasoff Reef

The project is funded by the Queensland and Federal Government through the Advance Queensland Small Business Innovation Research (SBIR) initiative.


With thanks to our project partners for their support of this initiative: